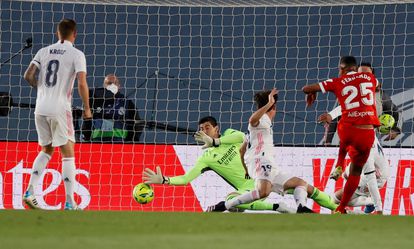 Julen Lopetegui conscientiously worked the game against Madrid. Also a club that refuses to throw in the towel. The visits of the president, José Castro, were continuous to the sports city throughout the week. Monchi, the sports director, did not stop for a moment to remind his squad of the importance of the match despite the defeat against Athletic. And Lopetegui, a bundle of nerves in the stands of Valdebebas for his sanction, surprised with an alignment without forwards, leaving without reference to the Madrid defense to try to generate superiority in the center of the field.

Theoretically, Papu Gómez exercised the functions of that false striker that Vicente del Bosque used in Euro 2012 with Cesc and Silva as protagonists. But Papu, many times, was the first to organize Sevilla’s game, coming to ask for the ball, acting freely. The Andalusian team was arranged with some other variant, such as the inclusion of Acuña more as an interior than as a pure left-back, forcing Ocampos to act throughout the right wing and harassing Modric a lot.

Curiously, the dominance of Sevilla in the first minutes ended with a series of centers to the area where there was no striker capable of finishing them off. Papu suffered a lot against Militão and Nacho, without room to turn and without speed to overwhelm them.

An overflow at four minutes and several judicious game changes were the best argument of the Argentine, who barely stepped on the area. Without strikers, Sevilla found the goal in a very well-mounted strategy action. Ball to Navas, who crossed to the area, where Rakitic and Fernando emerged as area men to make a great goal.

The Croatian’s drop was excellent, but what was surprising was Fernando’s quick action, who dribbled over Casemiro and scored with his left leg. In the end, the striker was Fernando, who had already made some interesting moves in search of the Madrid area.

Fernando has been one of Sevilla’s best players this season, rescued in the summer of 2019 from Turkish football by Monchi in exchange for four million euros. He has scored three goals in a season with 42 games in his legs at the age of 33.

In the 48th minute, Lopetegui observed how Papu did not reach a perfect deep ball from Jordán. Militão won the race with insulting ease. It was the epilogue of the Argentine’s party. Lopetegui returned to business as usual, entering En-Nesyri to hunt down a race and try to sentence the game. Papu was unable to shoot either in or out of the goal defended by Courtois. He gave 22 passes with an 86% success rate, without being able to recover a single ball.

Asensio’s goal came in full harassment from Madrid. Sevilla suffered and breathed in one of the most controversial plays of the season. Martínez Munuera whistled a penalty for a hand by Militão and it was another veteran, Rakitic, who scored the second goal with enormous coldness.

Lopetegui still had one more ace up his sleeve. From playing without strikers, he then went on to give De Jong in, with which Sevilla finished the game with two battering rams when he started without any. En-Nesyri, the team’s top scorer with 23 goals, could barely contribute anything, while De Jong’s entry in the 88th minute was testimonial. In fact, Sevilla received the tie when they had more forwards on the field. The goal, in Valdebebas, was the thing of two veterans with many stripes in Sevilla such as Fernando and Rakitic.