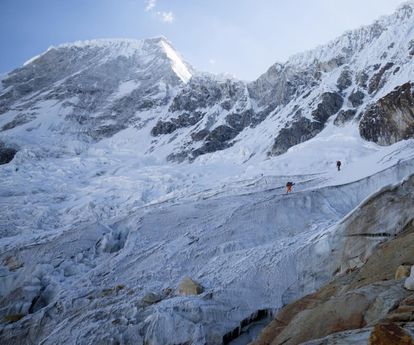 The meteorological reports announced a miracle and it occurred on Saturday, at the agreed time. There was the blue sky, the sun, the centrifuge of the wind caused by Cyclone Yaas finally turned off and without snowfall, the Czech mountaineers Marek Holecek and Radoslav Groh used the last gasp of their satellite phone battery to announce, as a desperate cry, the long-awaited news: “We go down, we go down, we go down!”

Nine days after starting the opening of the first route on the northwest wall of Baruntse (7,129 m, Nepal), the couple managed to survive, the real prize, the only one that counts for a mountaineer. It will not be a descent, it will be to open the coffin lid and flee. Three days ago, Holecek and Groh passed over the summit as exhausted as they were desperate at the magnitude of the storm that was insinuating itself over their heads, two specters in a mousetrap: “We didn’t even take photos, there were no expressions of joy and immediately we continued descending everything what the hellish weather allowed us. We will sleep in a completely wet bag ”. It was his first night caught at 7,000 meters.

They would still suffer two more days blocked, without food and with very little gas to melt snow and hydrate at an altitude that devours organisms, atrophies them and exposes terribly to pulmonary or cerebral edema. Two days ago, they sent the following message: “We have survived another hellish night under a real hurricane and a great snowfall. We had to constantly dig so that the snow did not bury our tent. All prayers are set on Saturday ”.

The Czech couple clung to life thanks to two combined factors: their tremendous experience and the possibility of receiving weather reports to know how to wait and activate at the right time, to resist keeping the promise of a happy ending indicated on Saturday. They did not use their satellite phone to call for insane rescues or claim chimeras: theirs has been an exemplary display of serenity, experience, and self-control. They were there because that is how they understand mountaineering, because that is how they assume the commitment to freely decide to climb a mountain according to ethical principles that do not admit doubts, errors or regrets. AND

he telephone has been his umbilical cord, a piece of wood on the high seas, but also a buoy for the waiting family. Marek Holacek usually teams up with his friend Zdenek Hak, with whom he has won two Gold Ice Axes, the highest award given by the mountaineering world. Upon receiving the second, in 2019, Hak wanted to make it clear that they both share the same feeling regarding mountaineering: “it is very important in our lives, but it is less important than our families, who come first. Third is our work as high mountain guides ”.

Before being strung up in 2017 to sign two of the most brilliant mountaineering sites of the last decade, Holacek and Hak had never climbed together: “I had to call him because no Czech acquaintances wanted to climb with me,” the first one would laugh. The same happened with Groh in 2019, when Holacek needed a partner to travel to Peru: he called the young man (32 years old) with whom he immediately made friends.

On the last day of May 1970, an earthquake hit the Huascarán region, a mountain pursued by a large Czech expedition: 14 of its members perished buried by masses of rock and ice and below, in the villages, 70,000 of its inhabitants disappeared forever. Half a century later, Holecek and Groh opened a new route in the northern Huandoy, a tribute to all the victims. The documentary Boys 1970 collect all your journey.

Both have now suffered one of the most epic episodes in the recent history of Himalayism, on a remote mountain but close to Everest, in a lonely place where helicopters do not fly, there are no fixed ropes, no oxygen cylinders, or Sherpas that make work, no Wi-Fi in base camp, no parties, no coronavirus … just the intimate and firm desire to treat yourself to an authentic adventure.