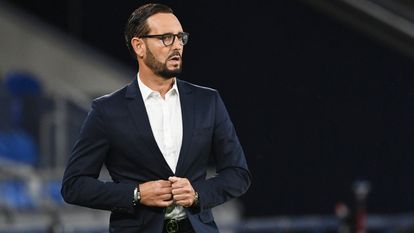 Meriton’s token, the company that owns Valencia, returns to the starting box. The bad season of the team, thirteenth classified in the League, quickly needed the impact of some hiring to bury a course in which it has failed. José Bordalás (Alicante, 57 years old) arrives on the bench, until now at Getafe. Since Peter Lim took over ownership of the Mestalla club, nine coaches have paraded through the team. The oldest, Nuno Espírito Santo and Marcelino García Toral. The Portuguese, the first of all, left near the middle of the course when he was about to complete two seasons of contract; the Asturian, who won a Copa del Rey, fell when he was about to start his second season. Both have been the most successful. Along the way, Juan Antonio Pizzi, Nuno, Gary Neville, Pako Ayestarán, Cesare Prandelli, Marcelino, Albert Celades and Javi Gracia have stayed. Year after year, the collection of dismissals increases, projects fall as they arise, and Valencia, within a loop, starts over and over again, condemned to forced labor. Now the turn is for Bordalás.

This time, the Singaporean tycoon has not taken long to give the green light to the hiring of the new coach. His distance with Valencia has increased since he fired Marcelino and Mateu Alemany as general manager, now at Barcelona. Since then, its president, Anil Murthy, under the supervision of Joey Lim, another of his employees in the city, manages the club to the rejection of the majority of the followers. As Lim recently said in an interview with Financial times, owning Valencia “has been incredibly good to be able to do networking”. “This is pretty. I wake up, I own a soccer team and see what happens. There is no more, ”he added.

Bordalás arrives a year late. The Alicante coach already negotiated with Meriton the conditions of his contract last summer. He was the one chosen to replace Albert Celades after Voro’s penultimate stage of transition at the head of the squad. The agreement for two seasons was total. The presence of Getafe in the Europa League during the month of August caused Peter Lim, who did not want to have the team training in the sports city of Paterna without a coach, to overturn the operation. Bordalás was eliminated from Europe by Inter Milan on August 5 and Valencia signed Javi Gracia.

A year later, Peter Lim has once again validated the hiring of the technician. Bordalás arrives with Javier Vidal, his physical trainer and trusted man. Signature for two seasons plus another optional. A release clause will be established in the contract, which means that at the end of each one of them, any of the parties may unilaterally terminate without paying compensation. To compensate Ángel Torres, president of Getafe, who loses a coach with a contractual relationship until 2022 and a compensation of 1.4 million euros, Valencia, in a parallel operation, will close the loan of a player.

With Bordalás on board, Valencia returns to the profile of a charismatic coach. “We want a leader,” Murthy said 24 hours after firing Gracia. The last coach with a strong personality was Marcelino who, precisely, was struck down by his constant clashes with the property. “If they do the same to Bordalás as they did to Gracia, hold on for ten minutes,” says a technician from the Paterna Academy. Perhaps that is why Meriton, who had to quell Gracia’s rebellion in October 2020, wants to negotiate year after year the continuity of his new coach.