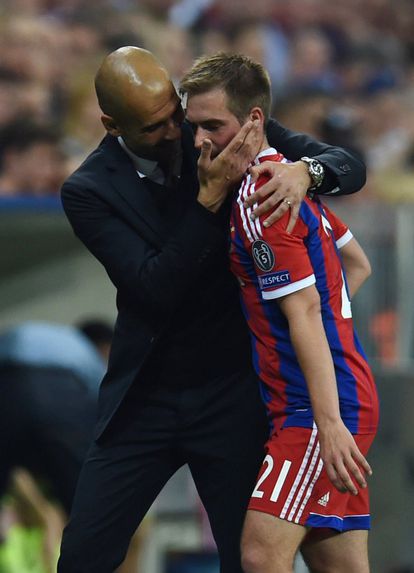 I have many memories of Pep Guardiola. He told me: “In the big games, I just pick the 11 best I have.” You have to listen carefully. That phrase contains the key to football: individual quality. Guardiola is a leading coach who loves the skills and talents of his players. Some coaches aspire to reduce the complexity of soccer. Guardiola, on the other hand, wants to master that complexity. His work could be compared to that of a great chess master or that of a conductor who brings out the best in each instrumentalist. What happens is that the group that plays football does not follow a specific score, and the footballer’s paths are more varied than those of the tower or the horse. It is not so easy to recognize what you are doing and what you can do in the field. Also, it is difficult to describe.

A great coach knows immediately what each one can do and who will be his central player. Then communicate to each player what their strengths and weaknesses are, as well as those of the others. Adjust the task and function of each one, every day. This Guardiola does with a passion that I have not known in anyone. Until everyone, even those who do not have minutes, accept that the coach is right. That gives you absolute authority.

A team needs help, especially during games. Guardiola trains actively, so the players are won. Leaders like Kevin de Bruyne, their captain at Manchester City, take on their influence, passing their ideas on to others. It has made Walker, a defender who is not the typical Pep player because of his disposition, better and better. Guardiola shows his loyalty to everyone, he gives everyone security.

Ilkay Gündogan is a Pep player from head to toe; always understand what the current situation of the team is. He always behaves well, he moves perfectly both in attack and when defending. He knows when to secure the ball in the middle zone and when it’s time to move into the box. Manage risk skillfully. Many times he anticipates where the action will end. So, suddenly, he goes and scores a goal. Guardiola needs players like that. And Gündogan benefits in particular from his coach because he internalizes and enjoys in that order.

This creates a unit. Guardiola’s teams can be recognized immediately, even if they are observed on a black and white television: the way they run, the sequence of passes, the placement within the area, the dribbles, the way their team carries the ball forward in unison and transports the play to the rival field. It is not something that the coach can achieve simply by giving orders in the locker room. You have to work hard to achieve that superiority every day.

When he started in Manchester in 2016, he rebuilt the team. After finishing third in the Premier in the first season, the team won two titles and is now back at the top, quite a distance from the others. His team never falls below a certain level, so he minimizes the matches in 38 games. For English clubs, the national championship is the decisive competition, it is the tournament that attracts the most money. The competition is very tough. Of the 11 biggest clubs in the world by turnover, more than half are in England. In each of the six or eight leading teams there are at least three or four players of exceptional quality. This concentration is something unique. In the last decade, five different clubs have won the Premier. Only Guardiola’s City managed to defend the title the year after winning, in 2019. They also won five of 10 Cup tournaments.

However, to win the Champions League you need a bit of luck in the draw and in the playoffs. If you don’t have all of your best players in shape in April and May, it’s going to cost you. Having highly talented players is also very important. In his years in Barcelona, ​​Guardiola had four or five players of this caliber, who were regularly chosen in the ideal eleven of the year. It is not something that I count on in Manchester, despite how much has been invested. As Guardiola once commented, young prodigies like Mbappé or Neymar still prefer the big cities like London or Paris, or clubs with glorious histories. If the squad is taken into account, City are not favorites. Especially since Sergio Agüero, a player with a special talent, is no longer at full capacity due to injuries.

After the high point it reached in Spain, it is seen that Guardiola is adapting. Barça was a team with very good wickers, in which practically everyone played various instruments well. When they won the Champions League in 2009 and 2011, they suffocated the rival. That style was possible because the whole club follows Johan Cruyff’s idea of ​​total football. Guardiola sees himself in this tradition; if they let him, he would put 11 Iniestas. In other places he had to sacrifice his idealism a little. In Munich he let specialists Ribéry and Robben act on the flanks, and the two full-backs heeled towards the center when the team had possession of the ball.

With the balance that exists in the Premier, Guardiola was not going to be able to reach the same level of dominance that he enjoyed with Barcelona and Bayern. The City now play with a more cautious style, entrusting themselves to athletic defenses that prevail in the air. The team sometimes delivers the ball, folds back, defends in its area, takes a breather and waits to set up the counter. The coach has learned to enjoy simple goals from a corner kick or a shot from outside the area; he has seen that those goals also have their appeal. He’s not just a fan of the ultra-offensive tiquitaca. What Guardiola does is develop the capabilities of his players, think about what each one can do in attack and defense.

I was an offensive winger; maybe that’s why we get along so well. Under his direction, City’s defenders organize the defensive phase better. Even Boateng has said that Guardiola gave him crucial lessons. Bayern players benefit from Guardiola individually, but also as a group.

This is not a contradiction. With Guardiola, everyone has to contribute to the benefit of the whole. He is even capable of inventing a position for an exceptional player like Messi, who became one of the wonders of the world under his command, with a reinterpretation of the position of center forward. He knows that the great games are decided by the great players. Creativity is more important than scheme. His football is a celebration of individuality. Guardiola pays tribute to his players and does not put himself or the system, be it 4-3-3 or 3-5-2, over the top. He is a friend of the players and is at their service. They all love Guardiola.

Philipp Lahm, A former lateral, he was trained by Guardiola at Bayern Munich between 2013 and 2016 and won the 2014 World Cup with Germany.