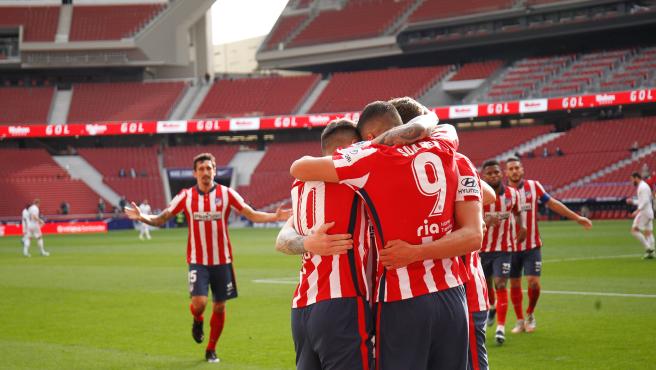 The Atlético de Madrid has been proclaimed by eleventh time as LaLiga champion. Despite having done it with tension until the last day, Simeone’s men have been an infallible bet this year, with a first round to frame in which they were a real steamroller. Although they had some bumps in the second half of the season, the players based on character, heart and, of course, quality, they have brought joy back to the Metropolitan.

The colchoneros, seven years after their last league, have once again formed a winning team, with figures of the highest level and with some of them playing a fundamental role in the successes of this team.

The guardian and savior Atlético de Madrid is Slovenian. In the 38 games that have been played in LaLiga, Oblak has kept his a clean sheet 18 times and has only conceded 25 goals. Some numbers that have earned him his fifth Zamora trophy and equal Ramallets and Valdés as the two goalkeepers who have won the award the most times.

The great discovery of the season in LaLiga. The midfielder has uncovered as one of the best players in the competition, in the year of its consolidation. After his match at Anfield last season he is a new footballer. Llorente has been Atlético’s best outfield player, a physical marvel on both sides of the field, with a fearsome offensive impact. In fact, he is the only rojiblanco to have signed a double-double, with 12 goals and 11 assists this course. A season to frame.

The central has been erected this year as the undisputed leader of the red and white defense and has contributed enormously to the recognition of his goalkeeper as the least thrashed in the competition. Savic, in addition to having taken a leap in quality this season, has become one of the locker room pillars from Atlético de Madrid. On the field, a forceful and solid center-back with great effectiveness when it comes to getting the ball out, whether building short or looking to surprise with a long ball.

They gave him up for dead, but he was out on the town. More than one must be pulling each other’s hair in Barcelona for having let the fourth top scorer of the season go. In his first year as a mattress maker, Suárez has shown why it was said that he would fit like a glove at Atlético, reaching twenty goals in LaLiga in the thirty games he has played, with several of them key, such as the recent one against Osasuna so as not to lose the leadership. In addition, his claw and fighting spirit marry perfectly with the intensity that Cholo asks of his family.

The Belgian midfielder lives a second youth in his new stage at Atlético. After a few years in Chinese football, Carrasco has shown that he left as a child and has come back a man, becoming one of the most unbalancing footballers in the competition. Although his scoring production is not so significant, when the Belgian faces with the ball at his feet, chaos begins in the rival defenses.

Correa has been Altético’s angel in the final stretch of the season. His contribution has gone from less to more, but he has always been important in Simeone’s team, starting from the bench to convincing his coach to give him a place in the starting eleven. In the last matches, his goals and assists have earned the rojiblancos points and ends this season with almost twenty participations in so many of the colchoneros.