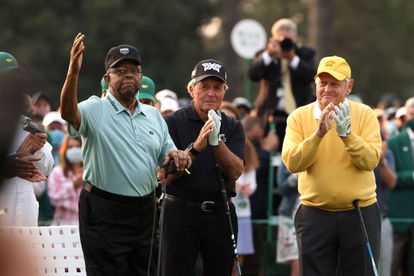 There is no Tiger Woods but there is Lee Elder, the first black golfer to play the Augusta Masters in 1975, whom Jack Nicklaus and Gary Player revere at the symbolic tee shot. It’s 7.45 in the morning and there the laughter ends. The agony begins, the fight for survival from the first blow. Augusta is Augusta again. The field has recovered its April skin, hard, firm, with those greens who have written a history of trenches. It is no longer the shrunken field of November, when the rain and cold changed his face and Dustin Johnson walked very cool with a -20 for the encyclopedia. The Masters remembers its old recipe: no one will win it on Thursday, many will lose it.

Sergio García receives three slaps as soon as he wakes up. If on the eve he celebrated his best feelings in a long time before a great, when he wanted to realize it he had loaded with three bogeys in the first four holes. To the starting pin on one to go in tow, as on five, another lost fairway that worsened with a missed short putt, and another short game error in the fourth season. The visit to the bunker in the nine made him close the first round with four up and a lot of cut ahead. The 2017 champion rowed until he caught some air on par three on 16, which he dribbled from the tee to remove a stone from his backpack. A delusion. From bunker to bunker, he added the discount at the close of the day and with another bogey under the blind with four more strokes and the road uphill for the cut this Friday. The same load as Rory McIlroy, somewhat lighter for Olazabal (+3). “Augusta is not the Augusta of 20 years ago. If you hit the wrong drive, you complicate a lot. It has become quite a narrow field and demands a lot from you. If you don’t hit him well and you’re not lucky, it’s complicated, ”said the Castellón native.

Playing the Masters without thinking about the Masters. This is how Jon Rahm stood at the starting line, the last of the class to arrive, also the happiest for the birth last Saturday of his son Kepa Cahill. With only nine holes of previous exercises, the Basque pulled off memories. No problem for anyone with a robot golf memory. The Basque signed up for birdie de rigueur on par five of the second hole, where he walks like home. Saving some putt delicate, Barrika’s arrived at the place of his last nightmare: November 2020, third round, hole eight. An Augusta pine crossed his path to the green jacket. That ball bounced off the tree weighed about a ton in a race unleashed for the lead. And there he stumbled again this time, erratic in the second blow, deflected the putt for a bogey.

Rahm already knew that it was a day for sandpaper rather than violins. When Augusta shows her teeth, you have to tighten your belt. The kindest days of flags will come. That the recent dad discounted a hit at 15, par five, seemed like a blessing. It looked like putt failed on the 18th, the pair on the day and a bittersweet taste. “That failure bothered me, but it was a great round of golf. It’s very complicated out there. The pairs are good. There are some greens on the edge of the precipice, ”Rahm analyzed. Only 12 players came off par from the field in the round.

For example of cold sweats, the number one in the world and defender of the green jacket. If five months ago Dustin Johnson broke a record as the champion with the least bogeys in the history of the Masters, only four in the tournament, this Thursday he added three in a single day, plus a double bogey at 18 for a +2 which is little more than a conviction. They all passed through the torture rack. DeChambeau can’t find the equation at Augusta. Something does not add up to your excel. Like Sergio García and McIlroy, penalty with +4. And Jordan Spieth, reborn after his victory at the last Texas Valero Open, saw them in all colors, from the triple bogey in the nine after hitting a tree at a eagle amazing at 15 from outside green. A stroke of genius to go back with a lot of mental strength to -1, still far from the head.

The seven shots under par of the leader, Justin Rose, with six birdies in the last nine holes and a teacher’s class in the grennThey were from another dimension. Their four hits ahead of Harman and Matsuyama are the second-biggest difference after a first round of the Masters, the biggest gap since 1941. You don’t win Augusta on Thursday, but you do lose.

Complete classification of the Augusta Masters.