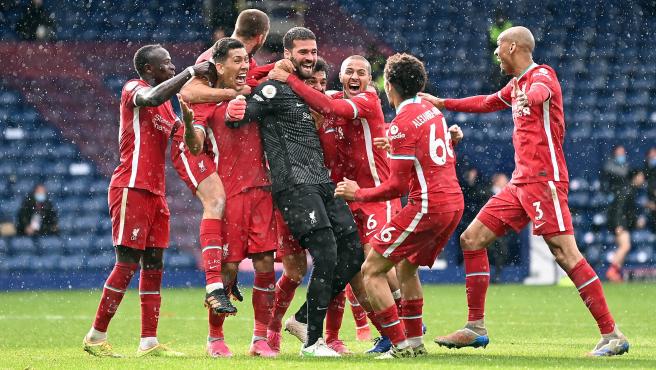 A goal by Brazilian goalkeeper Alisson on the last play of the match gave victory at The Hawthorns to Liverpool against West Bromwich (1-2) and brings him closer to the Champions League area of ​​the Premier, two days to go.

The net goalkeeper relieved Jurgen Klopp’s team, who, after sealing his third win in a row, is located to a point from Chelsea, fourth in the table, which marks the zone access to the highest continental competition.

It was in the minute 96 when a corner launched by Trent Alexander Arnold was headed by the goal, located in the heart of the area and who climbed desperately to rush his team’s options.

The goal can be decisive for the future of the ‘red’ team, who had a hard time finding the right answer against the relegated West Bromwich, who went ahead on the scoreboard at a quarter of an hour with a goal from Hal Robson-Kanu to pass from the Brazilian Matheus Pereira.

Liverpool reacted, tied in the 33rd minute through Egyptian Mohamed Salah after receiving a ball from Senegalese Sadio Mané.

Klopp’s team sought the winning goal in every way. He cornered Sam Allardyce’s side, but couldn’t beat Sam Johnstone until the last action of the game.

Alisson’s goal, headed, Liverpool’s options to play in the next Champions League reopens.