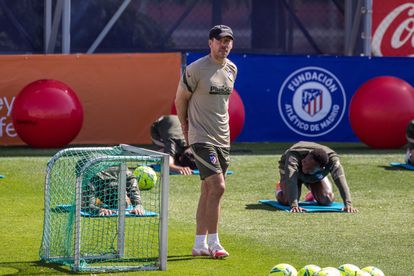 One begins by singing the first goal and ends up swallowing all the possible milongas: that football is a man’s thing, that you can change your home or partner but not your team, that Barça is more than a club, that is what they play at eleven against eleven and Germany always wins, that the world stopped when Maradona punctured the ball or that nobody negotiated as hard as Gaby, Bernd Schuster’s first wife. We all need something to believe in and football is in charge of writing us a New Testament every season, which is why it multiplies faithful throughout the world at a rate that any of the other religions would like for themselves.

I heard someone say the other day that the best lies are those that contain ninety percent of the truth. It seemed like a great phrase to me, perhaps the one that best defines a sport in which nothing is entirely true, at least not for a long time. Soccer, like the great fashions, is made up of temporary sentences that look immovable, a bit like the lyrics of the Back Street Boys or the fanny pack. “This is the most practical there is”Your father used to say, hooking that little bag around his waist before leaving the hotel, during the first holidays in Torremolinos. And you, who were a child and believed in him above all things, did not stop giving the can until they bought you the same or similar, as you did not stop giving the can until they took you to Pasarón for the first time or they bought you Futre’s nameless shirt, despite the fact that being from Barça and wearing the colors of Atleti seems like something strange. “The team of the people”, you defended yourself like a belly-up cat in a village of 500 inhabitants by not going into more details, totally convinced that the word town meant something else and laying the foundations of what, decades later, would be known as 15M.

My grandmother Saladina, when she saw me overwhelmed by the harassment of Real Madrid, told one of those lies that are ninety percent true: “Barcelona has two Recopas and Madrid none “. It comforted me in a strange way, old enough to distinguish silver from gold but child enough to continue to believe in other kinds of treasures. The invisible mesh that surrounds football is woven like this, based on small emotional conquests that have nothing to do with reason or data. The Leicester kid who watched his team conquer the 2016 Premier League, or the FA CUP this year, doesn’t care if it’s the beginning of something bigger or the end of a sweet dream, as they didn’t care. children from A Coruña who are pulling out their first gray hair today, hoping to return to Riazor to see a Deportivo-Compostela. Everyone lives their own milonga as they please and that is the great secret of football: not millionaire budgets, or pharaonic stadiums, or Superleague by invitation, or investment funds. Because one thing is that we like to live football as children, gullible lost, and quite another that they take us for an asshole.