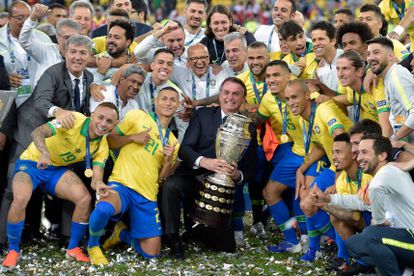 Hours after the Conmebol confirmed, through its Twitter account, that Brazil will replace Colombia and Argentina as the host of the Copa América 2021 and thanked Brazilian President Jair Bolsonaro for this, the Government of the South American giant left the event once again in the limbo. “There is nothing certain,” said the Minister of the Civil House (chief of ministers), Luiz Eduardo Ramos, in a statement at the Planalto Palace together with Marcelo Reis Magalhães, National Secretary of Sports. Bolsonaro and the Brazilian Football Confederation (CBF), quoted in the announcement of the South American entity, did not comment.

It was a chapter more than a day with negative repercussions for the Brazilian Government, which has not been able to justify that in the midst of the escalation of coronavirus cases it opens the doors to a championship of continental proportions. If it materializes, Brazil must receive officials, journalists and members of delegations from 10 South American teams, while it already has 460,000 deaths from covid-19 and is heading for a third wave.

The situation could not be more complicated. Senators investigating Bolsonaro for his handling of the pandemic requested that CBF President Rogério Caboclo appear before Parliament to justify the decision. The deputies presented actions before the Supreme Federal Court (STF) to prevent the tournament. So did the opposition of the Workers’ Party. In the midst of the debate over which cities could host the parties, the governors of Pernambuco and Rio Grande do Norte announced that they will prohibit the Copa América from being held in their territories. São Paulo Governor João Doria did not object to the event.

Throughout the day, the Brazilian Soccer Confederation canceled the press conferences of the players Lucas Paquetá and Fred, which were scheduled for the afternoon, in Teresópolis, Rio de Janeiro, where the Brazilian team is concentrating for its next commitments. The federal government, for its part, only manifested itself through Minister Luiz Eduardo Ramos, already at night, to reverse the confirmation announced by Conmebol. “Nothing is certain, I want to make it clear. We are in the middle of the process, but we are not going to avoid the request if it is possible to fulfill it ”, explained Ramos. “We are studying the details. God willing, tomorrow (Tuesday) we will have a final position, “he added.

Ramos stressed that, if held, the Copa América will not have an audience and that each delegation will be limited to 65 people. According to him, the vaccination of all those involved will be a condition to participate in the tournament. However, he did not explain how immunization will be possible in time for the start of the tournament, since Conmebol has guaranteed the start of the matches on June 13, too tight a deadline for any vaccine to be fully effective. “The venues will be the responsibility of the CBF,” added the minister.

Finally, Ramos compared the movements of the Copa América delegations with those made today by the national teams of the Brazilian league, or even the South American teams, where a representation of each club travels between countries. “Why will Brazil host the Copa América during a pandemic? Gentlemen, first it was a request made through the CBF, by Conmebol. Another thing: the Brazilian championship, which involves 20 teams in series A and 20 in series B, is taking place throughout Brazil ”, he argued. “I don’t know why people have spoken against the event, if the local championship is played, the [Copa] Libertadores and the Sudamericana ”, he concluded.

Bolsonaro has been an enthusiastic advocate of holding soccer games, even with the public, despite the pandemic. The celebration of the tournament would thus be a positive event for him and his more radical base. Alejandro Domínguez, president of Conmebol, celebrated: “The Brazilian Government has shown agility and decision-making capacity at a fundamental moment. Brazil is experiencing a moment of stability, it has a proven structure and accumulated and recent experience to organize a competition of this magnitude ”. The problem is that the Government is pressured both by the increase in infections and the detection of new strains, such as India, and by the investigation in the Senate.

The announcement of the event comes days after Anvisa, the government’s health surveillance agency, recommended banning the entry of foreigners from the United Kingdom, India, South Africa and Northern Ireland for at least 14 days.