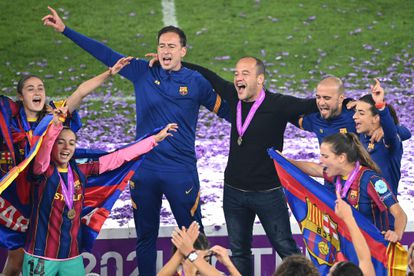 Allow me a family license – I hope the EL PAÍS style book also agrees – to congratulate FC Barcelona women for their victory in the Champions League. The first, that special first time, that day many times dreamed of and so many times so far away, as impossible as an unreachable soccer Everest.

And I ask your permission because, this education conditions everything, I do not know if it is right to congratulate your son from these lines but, after overcoming all the modesty, I think the event deserves it. So congratulations, Markel. And I explain that Markel is the sports director of FC Barcelona women. Our oldest son.

And with that said, Markel, let me share with you, all of you, a couple of thoughts.

The first refers to my times as a player, as a goalkeeper. May 20 is a date written in gold in the history of FC Barcelona. Wembley, the 92 Olympian, dreams were fulfilled and we gave ourselves the right to dream big. And we thought that at that first Orejona many more would follow. It is the least that could be expected from a team defined as Dream team. But the reality, football, came to visit us in September of that same 92 already post-Olympic and, after drawing in Moscow and reaching the rest of the second leg at the Camp Nou with a clear 2-0 on the scoreboard, CSKA Moscow He knocked us out of the group stage with three goals in the second half (wow, the terrible second half doesn’t seem like today). From champions to eliminated in four months. That was also a record.

The second reflection has to do with my passage through the offices and that strange mixture of enormous satisfaction for the victory and that corner of the mind that begins to talk to you about the management of the future, the dossiers to be dealt with, the decisions that exist to continue taking so that success does not paralyze projects, what we usually say is to manage happiness so that it lasts. All those things that are usually carried in the brain of a sports director and that make those who work with us wonder that the smile is not complete (now the masks may allow to hide it better) because the happiness of now is mixed with the grays of future decisions.

And managing success in these times of pandemic, economic crisis and instability becomes a huge challenge for which there are no previous experiences that can help you. This is a new situation that needs answers for this new normal.

As I write the above, I am thinking of Atlético and Real Madrid, who reach those last 90 minutes of the League to earn the right to enjoy that wonderful uncertainty associated with success and that they will be, surely, delighted to suffer them. As the classics would say, between first and second let’s stay with the first option and we’ll talk about how, later, we manage it. Although, do not believe, that some voice will also come out, always shouting “It’s the economy, stupid”, who will prefer second place, with the Champions League assured, without any direct impact on the box office due to the absence of public and an uncertain increase that comes from marketing and that it compensates the premiums and prizes that the winner must pay for that title.

And what am I going to tell them about Huesca, Elche and Valladolid, who are at stake to continue in the First Division, continue in the elite and be able to continue in first level football with what that means for the prestige and the economy of their clubs and their cities , Primera clubs in Primera cities. Those who are willing to give everything, even their soul, to succeed in surviving. And period.

Because in these times that we live so much success is to finish first as to stay alive.