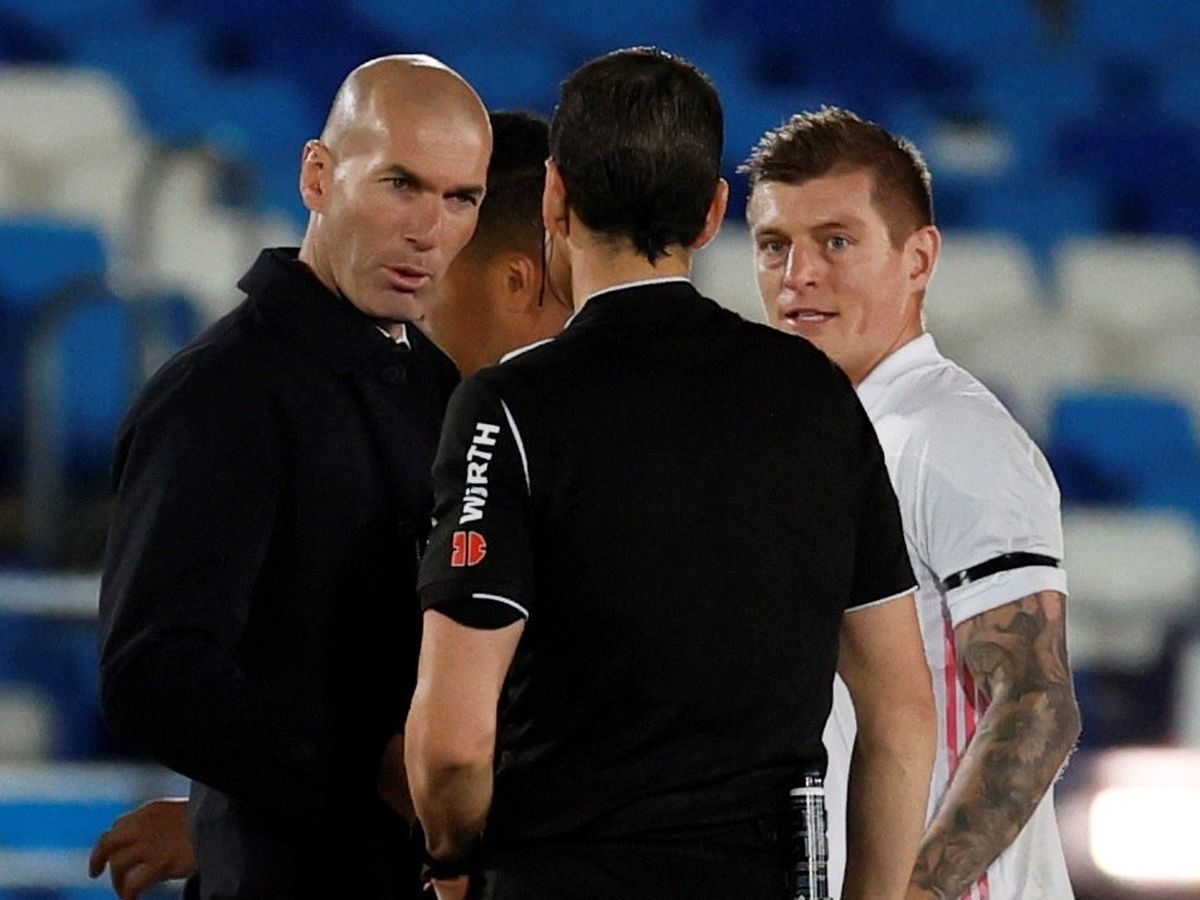 Zinedine Zidane was the last Real Madrid man to leave Alfredo di Stéfano’s pitch after Sunday’s game against Sevilla (2-2). He was also the last to enter: as soon as Martínez Munuera whistled the end, he went to ask him for an explanation about the minutes in which he went from signaling a penalty to Benzema, which was never taken, to having a maximum penalty thrown in the other area . The penultimate of Madrid on the grass was Toni Kroos, who crossed them on the way to the start and also got hooked on that set, as if he could still scratch something.

The German came from a task in which he had played the cornet like never before, pushing the team as the main source of danger, increasing the pace and intensity as the minutes ticked by. A crescendo match that Madrid tied at 93:30 after a shot from him that tripped over Eden Hazard’s left foot, perhaps the Belgian’s most decisive contribution since arriving at the Bernabéu almost two years ago. The deflection of the shot threw Sevilla goalkeeper Bono off the track and made Kroos’s shot his second assist of the night, with which he already has 55 in the league, according to Opta’s records. Since he arrived at Madrid in the summer of 2014, only Messi (98) and Luis Suárez (71) have added more goals than the German. Until he surpassed him on Sunday, the third was Karim Benzema, with 54.

The top assistants are usually forwards who provide each other with scoring chances. Of the 89 assists that he accumulated in the time that they coincided at Barça, Messi gave 32 to Luis Suárez, more than one in three. And the Uruguayan gave the Argentine almost half of his, 34 of 69. On the other hand, Kroos’ range of influence is much wider: the biggest receivers of his passes are Bale (8), Ramos (8), Benzema (7), Cristiano (7) and Casemiro (5). On Sunday he continued distributing: one went to Marco Asensio and another to Eden Hazard.

There is also another essential difference between the German and the forwards. He has assisted more times from the stopped ball (31: 22 from a corner and nine from a foul) than with the ball in play (24). Those traits cultivated over the years further highlight the intensity of the push that Kroos gave Madrid on Sunday while it seemed that the League was definitely slipping away from him, in a match for which he always traveled in tow, first in the game and then on the scoreboard. His two goal passes against Sevilla were at stake, as well as another that was about to be.

It happened at the moments when it seemed to boil over, when an hour into the game had passed and they were still behind on the scoreboard (0-1). At that time he decided to raise the revolutions of the team, which as Casemiro has explained at times, plays at the rhythm that the German decides (he was also the one who added the most total passes in the game). He had prodded his team a couple of times when they delayed a free kick: “Come on, come on!” Then he stayed in the area after a corner, careful not to fall offside, with the starting position of a 1,500 runner using the wingers before launching for a ball behind the back of the defense. Modric served him the ball with a spoon and he left it to Vinicius, who tripped over it and sent it to the post.

Asensio entered the field immediately, and at 77 seconds he finished off another pass from Kroos. The German, who had grabbed the team flag, did not stop pushing even after the tangle of penalties that angered Zidane. According to the metrics prepared by Driblab, he was the player of the match that posed the most threat to the opponent.

Until the shot from which the tie came, two and a half minutes after the referee whistled. Later, after midnight, as if still chasing the game, Kroos wrote on his Twitter account: “Proud of our team. Until the end!”.