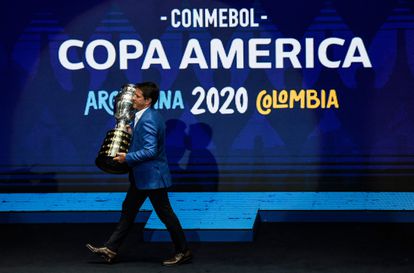 The Copa América will finally be played in Brazil. After the resignation of Colombia and Argentina, which were to share the tournament as venues, Conmebol announced on Monday, less than two weeks before the start, that Brazil would be in charge of hosting “the oldest national team tournament from June 13. world”. This is a rather surprising emergency decision, given the serious Brazilian health situation.

First it was Colombia who decided to withdraw due to the social upheavals that the country suffers. Argentina, despite going through the toughest moment of the pandemic and in full confinement, said last week that it was in a position to take on the tournament alone. President Alberto Fernández spoke with the leaders of Conmebol and gave guarantees. But on Sunday the Interior Minister, Eduardo “Wado” de Pedro, said during a television interview that he saw it “very difficult” to host the tournament. No more was needed. Conmebol announced eleven minutes later that it would not be played in Argentina.

“Conmebol informs that in view of the present circumstances it has decided to suspend the organization of the Copa América in Argentina”, noted a statement. The night from Sunday to Monday was abundant with phone calls. Chile and Paraguay (where Conmebol is based) seemed the most likely alternatives, if it was not decided to cancel the competition. Finally, however, the South American soccer confederation opted for Brazil, a country that has already suffered more than 460,000 deaths from covid and that during the month of May was around 4,000 daily deaths.

Argentina’s withdrawal, which did not become so because it was Conmebol who made the decision in the face of signals from Buenos Aires, was preceded by strong political tensions. Former president Mauricio Macri, current president of the FIFA Foundation, described as “incoherent” that Argentina, in a critical situation, host the Copa América. From Conmebol they branded Macri as “ignorant” and “malicious.”

But the Kirchner sector of the ruling coalition did not want the Copa América either. From the government of the province of Buenos Aires, the stronghold of Kirchnerism, the risks implied by the tournament were stressed over and over again. Some footballers, such as Uruguayans Luis Suárez and Edinson Cavani, directly demanded the cancellation. It was President Alberto Fernández who insisted that Argentina be the sole venue until the weight of the numbers (with 30,000 infections a day on average and 348 deaths on Sunday) and of reality (Argentine competitions have been suspended for two weeks) forced him to desist .

Subscribe here to the newsletter from EL PAÍS América and receive all the informative keys of the current situation of the region.