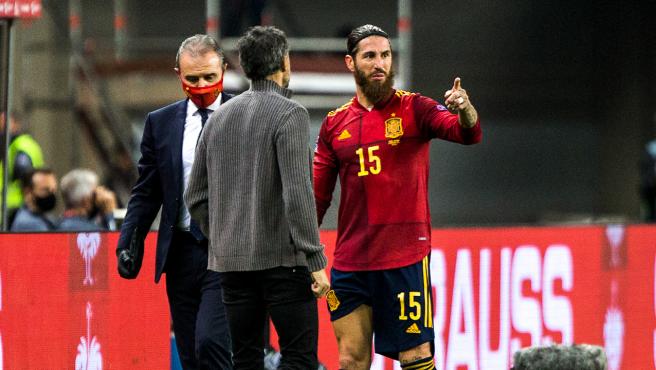 Luis Enrique does not stitch without thread. He never held his tongue as a player, much less as a coach. And in the Spanish selection It does not have a filter nor does it want it. That is why the way in which he began to give the call for the Euro 2020 where I was not Sergio Ramos It was not accidental, but it was very thoughtful.

“The making of the list requires many decisions to be made, an exhaustive monitoring of the players throughout the season, of their performance and even their behavior. (…) I can’t help but remember the players who have helped us throughout the season and who, for different reasons, cannot be in it. “Thus began the coach, almost putting the containment dam in front of him. typhoon that was going to befall him.

The relationship between Luis Enrique and Sergio Ramos has not been good for a long time. They respect each other deeply, but already. From the very day of the Asturian’s appointment as coach there was the ‘whir‘that the Barça of the first and the Real Madrid of the second could pose a problem. Nothing further: they reached an ‘entente’ and from then on everything was good mutual words.

That good vibes changed in March, in those three controversial games in which Ramos added minutes to strengthen his record as el footballer with the most matches in the Spanish national team.

Luis Enrique pointed out at the press conference that he understood that many questions were about Ramos’ absence. “When he put Ramos 90 minutes, he put 90 minutes and he would wear out, when he put five, why did he take that time to add an internationality … They are always complicated decisions“, he admitted, recalling the controversy and criticism that rained down on him for aligning the Sevillian in two of the three qualifying matches for Qatar 2022.

In that call there was a mess. The one with the matches for Greece, Georgia and Kosovo was the last list made by the Asturian coach before this final one for the Euro and, as this media has learned, Sergio Ramos didn’t like it at all. Style phrases “Who is this”, pointing to one of the new ones, or “what list is this” they came out of his mouth. Complaints in private, which ended up reaching the ears of Luis Enrique. The captain and the coach had a tense conversation, almost a fight, that rarefied the atmosphere of the national team. To top it off Ramos was injured although with two more games for his record.

The participation of Ramos in the Eurocopa was then subject to his state of form. Just a sudden improvement in your performance He was going to make Luis Enrique call him, since he realized that the footballer’s words, who assured him that he was fine in March, were not true.

So much so that It has not even exhausted the 26 available places: Luis Enrique prefers to save two holes in the team before taking Ramos and reopening the debate.

Dispense with a figure like Sergio Ramos is not a decision to be taken lightly. Luis Enrique knew in advance that he could generate the commotion that, finally, has occurred, and that is why he called him to inform him that he was not going to be there. A phone call that was cordial, but serious. The reason was not to laugh and what happened in March did not help.

In addition to being one of the best center-backs in recent times, Ramos has been the captain of Spain since he inherited his friend’s bracelet. Iker Casillas. He was precisely the one defenestrated by the previous coach, but with an obvious difference in the forms: Julen lopetegui did not solve it with a call, but traveled to Porto to tell the goalkeeper in person that he was not going to have him.