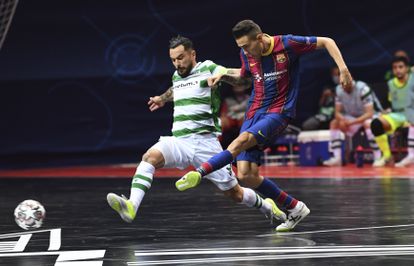 Just seven months ago, at the Palau Blaugrana, Barça were crowned in the Champions League by beating El Pozo Murcia – a competition delayed by the pandemic – to raise their European laurels to three (2012, 2014 and 2020). This Monday, in Zadar (Croatia), he was left with the desire to repeat the feat when he fell against the tough Sporting de Portugal (3-4), who signed a sensational second act to dislodge the Catalans. Sporting’s second European laurel, still far from Inter Movistar’s record (5) and a blow to Barça, which could not match Playas de Castellón and Inter Movistar, who managed to add two consecutive titles.

Sporting de Portugal was not a minor rival, which added 45 games in a row without losing, a physical team at the best and playing at the limit of the regulations, always more lax in Europe. This was explained to Ferrão (named best player in the world), who was killed five seconds into the duel. But Marcenio replied with a dry shot that beat Guitta. And more goals that could come, only denied by the sticks to the shots of Esquerdinha (twice) and Coelho. Until Ximbinha, on the edge of the break, made the second.

But Sporting did not give up, which burned in the second act and dismounted Barça with their offensive football thanks to goals from Zicky, Erick, Matos and Varela. Ferrão appeared at the end, but it was late and Barça lost their second final [la otra en 2015] and the condition of champion.