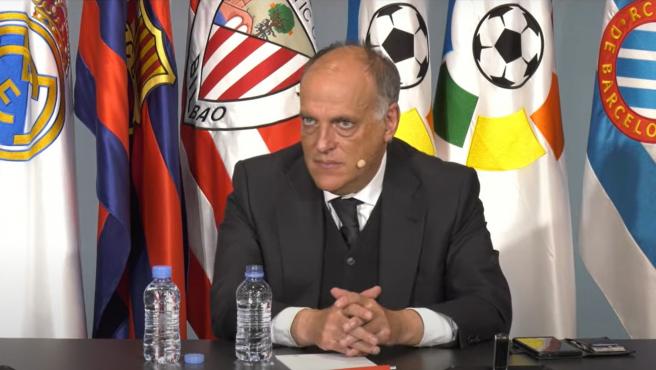 Javier Tebas returned to the charge against the Super league in his speech at the CAP meeting organized by the European Leagues. The president of LaLiga assured that he spoke “in a personal capacity” and was dispatched at ease after the opening of disciplinary proceedings against Madrid, Barça and Juventus by UEFA and their response, betting on the Super League, despite the refusal of the European body.

“We would like them to be able to play the Champions League, but if they let us do stupid things, maybe they play. You have to be responsible for the acts. What cannot be done is to carry out a coup d’etat, to go away and raise your hand to say I want to negotiate, “he said.

“What bothers me the most is that they think we are stupid, naive. They play with our naivety, with our silence, with our politically correct. Let’s not be naive in this battle, “added the leader.

He also assured that he will abide by UEFA’s decision on whether to expel the three clubs involved from the Champions League: “What they tried to do is very serious, a coup against European football, against European competitions. What was done is very serious. The president of LaLiga It will respect any type of decision that is made, whether Spanish clubs or not involved, the facts do not go with the nationality but with the conduct of what was done “.