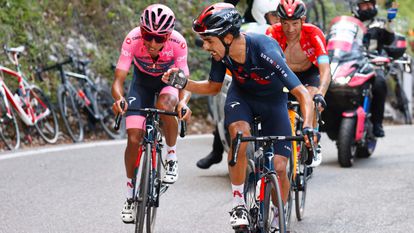 The sun shines. Simon Yates sings. Simon Yates flies. Egan Bernal folds his wings. Resist. The aching back, bent over the bike. A shadow in his gaze. “The sun is shining, I am shining”, says the Englishman, erect, agile, on the pedals in the last kilometers of the ascent to Sega di Ala, to the meadows at 1,246 meters above Trento, on Lake Garda, where shepherds climb their cows in summer and sleep in stone-roofed huts, where Yates attacks once, twice, three times. Egan answers the first. Egan answers the second. Egan cannot handle the third, propitiated, ironically, by the Colombian’s own partner, Daniel Martínez, the prince of Soacha, who in his spirit only thought of speeding up to launch his boss, his friend.

Yates are still flying, an alcotán, a harrier, a harrier, as the English say, which is what they call their fighters and their athletic clubs. He flies but his flight does not give him to catch up with Dan Martin, the Irishman who fled early with 18 more and resists, it is his job, it is his life, to resist, it is his style, and he wins. Stephen Roche’s 34-year-old nephew, in his spilled red wine jersey, already has in his hunting notebook two stage victories on the Tour, another two on the Vuelta. He has already won in the big three.

There are three kilometers to go to the end of the toughest climb of the Giro d’Italia. Martinez pulls Egan away. He turns and threatens him with his fist, demands, asks him not to give in, forces him. And at that moment, he explains, the head rules. Logical reason prevails over panic. Egan calculates: Yates takes more than four minutes in the general classification, he can leave him margin; Behind comes Caruso, second overall, just over two minutes behind. Think and act. Try to catch your breath, lower your heart rate, prepare for when Caruso hits you and stick to his wheel. And resist. And, cycling is always irony, finally, Caruso catches up with Egan and tora him, helps him. The wheel of the second struggling to be second is the best wheel for the first. Only finally gave 3s to the Sicilian, who is second, at 2m 21s; 57s with Yates, who is already third, at 3m 23s. “It was a bad day, but it went well for me,” says Egan and smiles.

“I was wrong, I was wrong, I was wrong”, Egan repents three times, who knows that if he had known the climb, so hard, with so many ramps at more than 15%, with a very smooth finish, two kilometers almost on a false level , I would have done better; that he admits that he should not have followed Yates so quickly in an attack as explosive as that of the Englishman, so painful for the Colombian, who runs out of air, and pale as the Dolomites that crowned him; who thinks that yes, perhaps, the rest day did not suit him so well; that recognizes Yates’ superiority on such tough terrain. “And Yates was so strong,” adds the Colombian, “that not even the best Egan could have caught up with him.” And he could also have added a fourth error, because it was his Castroviejo who, remembering the cyclist that in the London Games, where he alone ended Bradley Wiggins and the entire British team, has left the peloton in nothing, in half a dozen, during the ascent to the Sega footsteps. Vlasov, Carthy, Ciccone have been taking off from his wheel. And Egan smiles, he feels strong then.

Mikel Nieve turns 37 years old and he does not celebrate them by blowing out the candles on a cake but by sweating the candles, pulling the peloton in the endless ascent of San Valentino, the port prior to the final climb. The iron man from Navarre works for his team, the BikeExchange. Nothing distracts him, not even the memory, the memory of his big day when, on the initial descent from the Fassa Valley towards Trento and its green and wet vineyards, a roundabout points out the Gardecchia road, where years ago he won the most important stage. hard to remember. You have a job to do. You have to toughen up the race. He has to ensure that when Yates attacks, Bernal is very lonely. A gregarious job, a professional cyclist job that does not end at the top, but down, in the valley, at the exit of a right-hand curve of the descent into which Nibali and Ciccone have fallen, and a few stumble over them, Snow also. Behind comes Remco Evenepoel, a bit distant, descending very cautiously. Brake. Try to avoid the pile of bones, moans and bikes that block the way. He goes to the right, but cannot control the bike and jumps over the high guardrail. The Belgian prodigy who is learning to be a cyclist in the hardest way, with blows, gets up and remains standing on the side of the road. And Snow, an older brother, 16 years older, a father, comes to comfort him, to encourage him. Remco does not give up. He gets on the bike and continues, head hard, a bandage on his left arm, with his learning. Reach the top more than 36 minutes from Martin.

There are four stages of Giro. Two finishes still up, a 30-kilometer time trial. The emotion, the memory of Yates, his desire, say that the Giro d’Italia begins again. The leader who seemed untouchable, so superior, has shown weakness one day. Rivals fear him less. Thus, with a bad day, a drop that was the beginning of a cataract, the Englishman so superior until then, so fresh, began to lose the Giro of 18 with Froome. Egan admits that yes, the plan was not to spend as much as he has spent in the first week, but that he needed it, that he was excited to feel strong again, that the adrenaline could with his will. But he means now that nothing is happening, he assures that everything is under control, although, of course, he adds, “I remain grounded, this does not end until Milan.” “But I’m not unbeatable,” he says. “Nobody is unbeatable.”