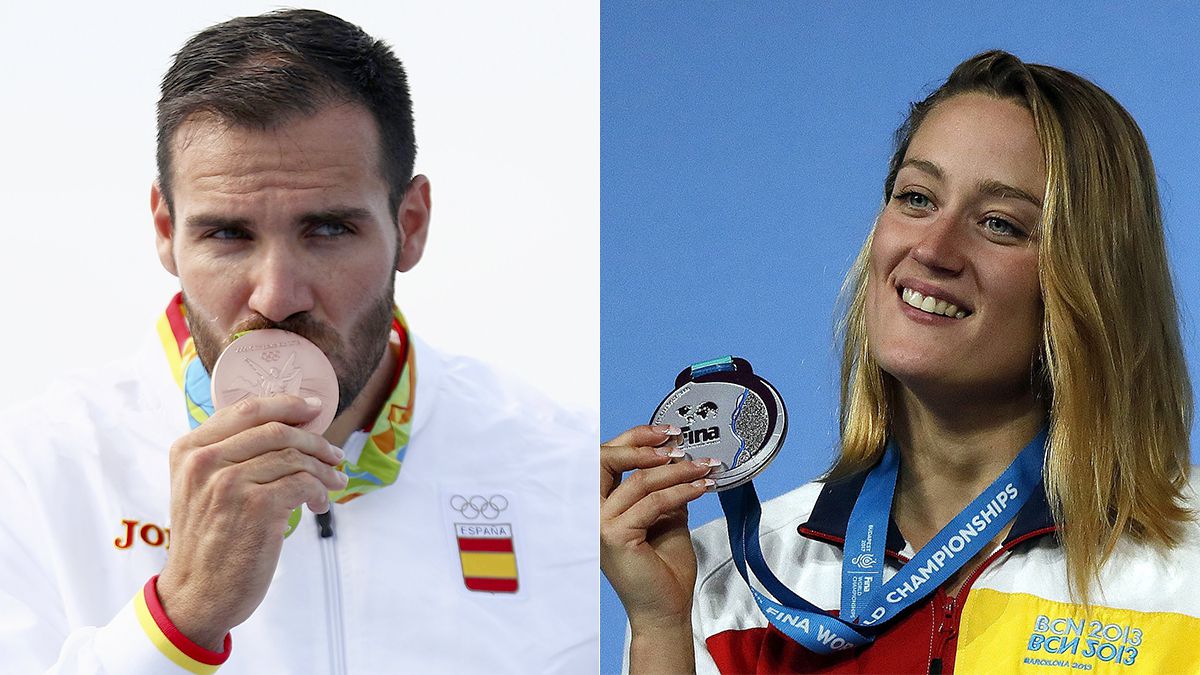 Saúl Craviotto and Mireia Belmonte will be the Spanish flag bearers at the opening ceremony of the Tokyo Olympic Games, which are held from July 23 to August 8. For the first time in history, Spain will have a double representation in this act, a man and a woman.

Saúl Craviotto is 36 years old and has an infinite hunger that has pushed him in the canoe since he got on it when he was a 17-year-old youth. His coach, Miguel García, describes it like this: “When I was a junior I was a junk, it has evolved. Saúl transforms when it comes to competing. He is one of those athletes who, apart from the flashes and the physical and mental quality, are capable of being where they need to be and performing at the right time of day. d at the time h. That is what distinguishes it from others; also the ability to recover from blows ”. García is the person who knows him best and who has been by his side for the longest time, writing down his performance data in dozens of notebooks. The canoeist has four Olympic medals, two gold (in addition to one silver and one bronze), and will seek in Tokyo to reach David Cal as an athlete with the most Olympic metals (five).

Mireia Belmonte, who like Craviotto debuted at the 2008 Beijing Games, is now 30 years old. An age in which in their sport the majority have already abandoned. Belmonte has taken Spanish swimming to the top: no woman in Spain had ever been an Olympic champion. He got it in Rio 2016 when he won the 200 butterfly (the only other gold is from Martín López-Zubero in Barcelona 92). Like Craviotto, he has four Olympic medals; one of gold (in addition to two of silver and one of bronze). The two have been appointed this Wednesday by the Board of Olympic Federations to be flagged at the opening ceremony of the Games on July 23 in Tokyo.

For the first time, two athletes – a man and a woman – will carry the flag together in the parade. The rule change was promoted by the International Olympic Committee (IOC) in March last year, just before the pandemic forced the Games to be postponed for a year. IOC President Thomas Bach encouraged all National Olympic Committees to bet on the option of carrying two flag bearers, a man and a woman, as a sign of equality.

Craviotto has reacted like this after hearing the news: “There are no words to define this, I think you are not aware of how happy you have made me today. For an athlete like me, the best thing is to go to the Games and get a medal, and the top is already carrying the flag. I am delighted to represent the image of equality with Mireia. I’m not going to settle, we are going to try to go to Tokyo for another medal. So far today I have received the most, thanks from my heart. I have tried to think things up, prepare something written, but nothing, I just speak from the heart ”. Belmonte has stated: “It is an honor for me, it was a dream to fulfill. This year is a year of adapting to what exists, not only in sport but in society in general [por la pandemia]. It will be different, yes, but you have to enjoy what’s out there ”.

Unlike the canoeist, who arrives in Tokyo in full physical condition, Belmonte has so far qualified for only two tests (800 and 1500), and is in the last part of his career. He has barely been able to train in recent months due to tendonitis in his shoulders that prevents him from keeping up with his teammates. He has lost several concentrations of the team in altitude and as many national competitions. At the beginning of March he declared that he hopes to be able to get his best version at the Games and that he believes he will be able to make competitive marks. This Sunday he swam the 800 meters in 8m 44s in Manresa (the best world records of the year are Katie Ledecky’s 8m 23s 13c; Ariarne Titmus’s 8m 23s 13c and Simona Quadarella’s 8m 23s 77c).

It was an open secret that Craviotto and Belmonte were the chosen ones. They are the Spanish athletes with the most Olympic medals. “The fact that Saúl is the standard-bearer is a leap for our sport. It’s like what happened with Spain in the World Cup, they were good, but that recognition was lacking, ”explains García, coach of the K4-500, the ship captained by Craviotto that will seek to defeat Germany and win the gold.

The last Spanish medal in a K4 was achieved in Montreal 1976, and it was silver in the 1,000 meters of the pioneers of this sport: Herminio Menéndez, Luis Misioné, José Ramón Díaz Flor and Chema Celorrio. Craviotto could also double in Tokyo and also row the K1-200. His coach assures these will not be his last Games and that he will arrive in Paris in 2024. In the French capital Saúl would be 39 years old, 22 of them in the elite. The oldest captain. “He is courteous, firm, bizarre, constant, patient and humble. Very balanced in its performance and way of being. Responsible, focused, aware of his worth and inspiring to others. He transmits good vibes to everyone around him ”, describe his colleagues Carlos Árevalo, Marcus Cooper and Rodrigo Germade.

The joker of the group

He is the joker of the group and that is the best indicator of his state of mind. “From his junior days he was a bastard, before much more than now. He’s a bastard! And also it shows, the more bastard he is, the more rested he is. As he gets screwed up, he fades away and he doesn’t have so much backwardness “, says García, who one day woke up on the plane from Madrid to Asturias because of Craviotto’s blows:” wake up, they are diverting us to Barcelona! ” And it was a joke.

His coach affirms that in 2008, when he won the gold in the K2-500 with Carlos Pérez Perucho, they did not imagine that Saúl would arrive until here. “People think that once you are there you get the first medal and then they all come rolled, in a row and it sucks for anyone. It is not like this! We really have a lot of hits, but big hits too. The blows that life gave us are blows of reality. It is so difficult to tune everything that sometimes without knowing why, you fail. That is why we savor each medal very much, ”he argues.

The biggest hits were in the pre-Olympic years: in the 2011 and 2015 World Cups where no medals were taken and even the final was not reached. In all the Olympic cycles Craviotto has had to play the pass to all or nothing in a pre-Olympic. The mental exhaustion was such that a few months before Rio said that he would leave it in 2016, that just the idea of ​​suffering that exhaustion again made him nauseous. But since it’s a racing machine, here it is again.

And this, which paradoxically was going to be the most bearable cycle because he got the place in the 2019 World Cup, has been the worst, according to his coach. “We had the feeling that we did not have the support of our home. We never felt that we were supported by our Federation ”, says García a few hours after taking off to Szeged, Hungary, where this weekend they will play the World Cup.

Belmonte’s medals are also the result of hours and hours of work and sacrifice. No one can be guessed in the Spanish quarry who can follow in his wake. The leap in quality was made by Belmonte when he placed himself under the command of Fred Vergnoux and his innovative working methods. Vergnoux said about Mireia in 2017 that he was like Benjamin Button, who every year saw her younger and able to swim faster. Until the stoppage of this Olympic cycle due to the problem in her shoulders and migraines that caused her such dizziness that they forced her to stop in the summer of 2018.

Serious from the outside and much looser at short distances, Belmonte is described by her training partners – the so-called death group– as an athlete “very focused, ambitious, meticulous in all the details, also in those of invisible training and with very clear things and objectives,” Jimena Pérez pointed out in 2020 at a concentration in South Africa.

His companions are witnesses to the improvement he had when he crossed paths with Vergnoux. “The two were clear from the beginning what they wanted and Mireia from there has been able to prioritize,” says Alberto Martínez, another of his teammates and qualified for Tokyo in open water swimming.