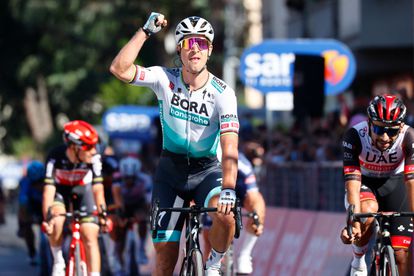 In the days of Cipollini, 25 years ago, when a mountain would arrive, the companions of the Tuscan sprinter would take the lead, slow down, shout bolt, bolt, so that whoever was inside would mark the horseshoe curves as if it were a military parade and they launched their proclamation, woe to him who tries to accelerate or attack, all the evils of hell will fall on him. Nobody moved. The stage slept until the Lion King team decided, the later the better, and the sprint was clearly won, and everyone was happy. In Sagan’s day, a quarter grade is a reason for his boras, led by a young Italian superclass named Aleotti, set such a hellish pace that half of the sprinters suffocate and hang down and the other half arrive so tired on the labyrinthine streets of gloomy Foligno – short stage, 137 kilometers, and very fast , almost 44 on average – that Sagan easily beats his friend Gaviria’s sprint, with almost a bicycle advantage.

“That’s how I like the stages, you last all day, and that only the strongest survive,” emphasizes the Slovak, who for two years had not won a sprint in a big one, and after a dry 2020, this year he has already been three victories in massive arrivals, in the Volta, in Romandie and in the Giro, which reaches its first day of rest. “Uff”, says, dressed in pink, Egan, “what a hard day.”

Between Perugia and Assisi, in Foligno, where fertile fields hang on the slopes, some verses by Dante, from his Paradise, receive cyclists who speak to them of the greatness of the sun and of the little unthinkable things, of sudden impulses that make great to people, such as Egan and Remco, who are suddenly two kids, two children, racing in the street of the town one boring summer afternoon and no longer the first two of the Giro, separated by only 14s in the general After nine stages, the most desired, the two whose pulse on the dirt roads of the Tuscan vineyards Montalcino is longed for on Wednesday, and salivates in anticipation, and its continuation in the Zoncolan and in the Dolomites, and in all the Alps the last week.

Don’t you catch me, Egan seems to say to the Belgian 500 meters from the banner of a flying goal with a prize of 3s, 2s and 1s for the first three. And before Remco responds, Egan already jumps, dragged by the slipstream of his giant Ganna, a world champion, and a second later the crazy Cavagna, the TGV of Clermont Ferrand, is already pulling Remco, splendid in his white jersey of the best young man that Egan has lent him so proud of pink. He has such an advantage Egan that it seems a pulse won, but against Remco nothing is ever certain. The bills of the soul are never paid, sings Rubén; the races against the Belgian flea can never be taken for granted, which leaves the Cavagna wheel and pedales strong, strong, faster than everyone and overtakes and overtakes Egan, who cannot take any more. Only Narváez, a friend of Egan who takes advantage of their efforts, saves the honor of Ineos and steals Remco’s 3s by overtaking him at the last moment. And then the Belgian, with a face to say how good this has been, extends his hand to greet Egan, we must repeat it.

Such a trivial story inflames the press room, that from it, in the way in which Remco regains lost ground, in the freshness of his legs, in Egan’s unexpected daring, in his free way of running, he extracts gold , signs of greatness, and the entire Colombian press conference is a pulse between some journalists who insist on magnifying the battle of the flying goal as a symbol of the battles to come between two of the greatest cycling talents of the 21st century, one born in 97, another in 2000, an initial mental battle, and the Colombian, who seeks good sense, not to let his spirit or imagination fly, and insists on remembering that there are more cyclists in the Giro, that this has not We have just started, that there is a long way to go and, above all, that Remco is a great runner with whom he is very comfortable and with whom he gets along very well. “The seconds will be minutes. It will not be just a mental challenge. The strongest will win, ”says Egan. “And I want to emphasize that there is a lot of respect between us. There is no rivalry. He is a great runner and even a good person ”.