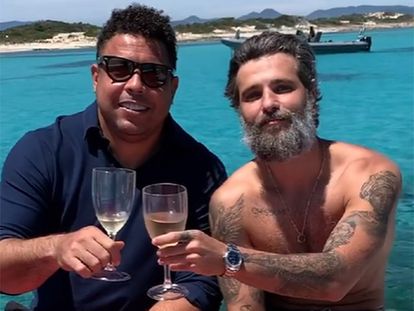 In the midst of the fight for the League that Atlético and Real Madrid have stretched until the last day, Ronaldo appears, white legend, maximum shareholder and president of Valladolid, the rival of the rojiblancos on the last day of Saturday. If Atlético wants the title without depending on what Madrid does against Villarreal, they must win at Zorrilla. A draw or a defeat would allow the Whites to take the title if they add up their three points at Di Stéfano. In a way, Zidane and Ronaldo share a destiny, as if from galactics. Although their clubs are far apart today: the Frenchman can still catch his second league in a row; the Brazilian needs a triple carom to avoid relegation.

Ronaldo’s love affair with Valladolid is at its lowest point. The team lost on Sunday in Anoeta against Real Sociedad (4-1), and upon reaching Pucela the expedition found a banner on the facade of the stadium that indicated to the president: “Ronaldo guilty”. He didn’t see it. He had neither been to San Sebastián nor had he traveled with the team. The first thing that was heard of him after the defeat in a decisive match for the options of permanence was the next day, through Bruno Gagliasso’s Instagram: the Brazilian actor published a short looped video in which he toasts with the ex-footballer to aboard a boat that floats off the island of Formentera.

The president of the Valladolid supporters’ federation, José Antonio Pérez, voices the discontent of the fans: “He can be on a yacht, or do whatever he wants, but I don’t think this is the time for such a photograph,” he says. . Several people close to the club privately acknowledge that they understand the widespread anger in the city.

The president’s cabinet director, David Espinar, downplays the relevance of the image with respect to the whole: “He continues to behave as from the beginning. Nothing has changed his commitment, nor his desire. Keep on top of day to day in the same way. He continues to suffer a lot, ”he says.

However, according to the president of the clubs, for the fans a lot has changed since those initial moments of falling in love, when Ronaldo arrived in Valladolid in September 2018, after buying 51% of the shares for 21 million. At the end of the presentation of the agreement in the City Council, the ex-footballer and the mayor walked to a restaurant and needed the local police to make way for them among the thousand fans who took to the streets. Pérez, who was also at that meal, so exciting, sums up the disappointment: “He let the team die,” he says. It refers to a widespread reproach in the city for the lack of intervention of the ex-footballer, for example changing the coach, Sergio González. They have only won one of the last twenty games. The chronicle of the Real de El Norte de Castilla party insisted on the complaint: “Ronaldo’s project is cracking in sports, without the president and maximum shareholder having done anything to stop the bleeding.” Espinar explains that the president “understood that the coach had to continue until the end of the season.”

But little is known about Ronaldo through his words or through his networks, as Pérez says: “He doesn’t speak, you don’t know what he thinks. Before there was more relationship, you could see him around here. But since January it has been disconnected. After a press conference in which they gave him a lot of cane ”. In an appearance last December, he was uncomfortable with some questions about the origin of part of the money with which he had bought the club. “Step of your questions,” he ended up saying, after insisting that he had acquired the shares with his funds, without resorting to loans, and that he intended to stay with the club for at least three or four more years.

That and the subsequent silence of the largest shareholder has not reassured the fans, according to Pérez: “We don’t know if he is going to sell, or what he wants to do. It’s worse not knowing. People are worried ”, he points out. However, Espinar does not see changes even if Valladolid descends: “Knowing him, I would be surprised,” he emphasizes about a possible sale.

Before that, Valladolid has a small chance to continue another year in the First Division: if they beat Atlético, Huesca loses against Valencia and Elche does not beat Athletic.

In any case, everything starts with Valladolid, in a delicate institutional and sporting situation after a very painful defeat in San Sebastián that Joaquín, one of the centrals, summarized on Monday: “After 4-0 in half an hour, there were people who had anguish , want to cry in the field, “he said. “They were very, very bad feelings, which I have never had in a field.” Yesterday Kiko Olivas, another central defender, wanted to show hope: “I keep holding on to that possibility. I keep thinking that something good has to happen to us, “he said. Sergio does not give up either, and as in the happy days of promotion, he continues to play the song in the dressing room before the games Eye of the tiger, from the soundtrack of Rocky.

Of Ronaldo, who does plan to go to Zorrilla on Saturday, nothing is known directly. None of the sources consulted in the club knew yesterday that he had spoken with the coach or with the players since Sunday. According to Pérez, the fans have hardly any desire to rebel. Mayor Óscar Puente issued a warning about fan gatherings near the stadium on Saturday. But directed at Atlético.