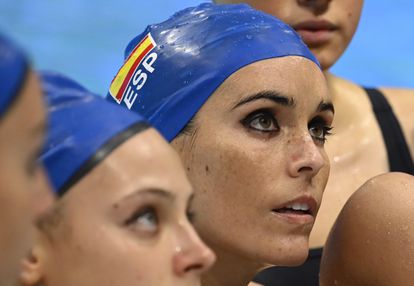 Ona Carbonell returned to competition on Wednesday two years after her retirement. The Spanish artistic swimming team captained by its 30-year-old star returned to the podium for the first time since the Barcelona World Cups in 2013.

Ona Carbonell’s last major competition was at the World Cup held in South Korea in July 2019. At that event, she became the swimmer with the most medals in the history of the World Cups, with 23, and only surpassed by two men. , Michael Phelps, with 33, and Ryan Lochte, with 27. To that booty, Ona adds two Olympic medals, duo and team in London 2012, and 13 in the Europeans, for a total of 38.

In September of that year he announced his retirement. Although he left a door open upon his return, then his participation in the Tokyo Games seemed totally ruled out. In August 2020, she gave birth to Kai, her first child as a result of her relationship with former gymnast Pablo Ibáñez. The postponement of the Games until July 2021, allowed Ona to establish a tough training plan to return to competition. The Pre-Olympic in which the Spanish team aspires to get one of the three vacant places for the Games was also postponed. The qualifying tournament was to be played from May 1 to 4 in Tokyo, but was suspended due to the pandemic and will be held in Barcelona from June 10 to 13. Spain is already classified in the duo category.

The Spanish technical team that won the bronze in Budapest was composed of Ona Carbonell, Meritxell Mas, Paula Ramírez, Iris Tio, Berta Ferreras, Alisa Ozhogina, Sara Saldana and Blanca Toledano, they swam an inclusive routine during which they used sign language, with a Japanese song interpreted by the guitar of Juan Manuel Cañizares and the composition of Salvador Niebla. Russia won the gold and Ukraine the silver. It was the second medal for Spain, after the silver in the mixed duo, obtained by Emma García and Pau Ribes.

When she announced her retirement in September 2019, Ona argued: “As a woman and athlete, reconciling my professional life with my personal one implies making decisions like this and putting sport aside temporarily, without this meaning that I am going to give up my career. as a swimmer. I will work in a different way than I have done so far, so that later on I can be back in the water with them in future sporting commitments ”. Finally, after the postponement of the Games until July 2021, she resumed training in November 2020 and explained: “I wanted to compete again after giving birth as a sporting challenge, but above all as a moral duty.”