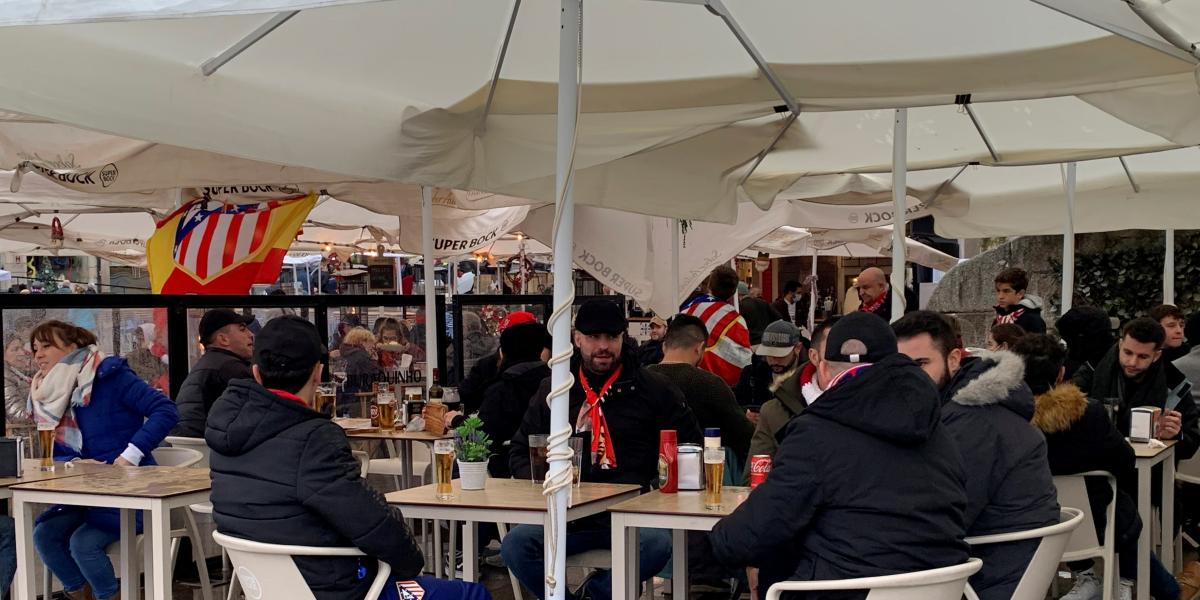 Neither the persistent rain that falls in Porto nor the negative coronavirus test that all fans have to submit to enter the stadium stopped the mattress fans who traveled to Portugal to cheer on the team “in situ” Atlético de Madrid.

Although the weather was not good, heThe red and white colors were paraded this Tuesday through the center of the Invicta City, where the Madrid team plays in a decisive match the pass to the knockout stages of the Champions League.

On the banks of the Duero, next to the Luis I Bridge, one of the most touristic places in the area, two bar terraces were completely occupied by Atlético fans, who felt almost like in Madrid.

“We have seen more Spanish than Portuguese, so we feel at home”, assures EFE Álvaro, a young fan who has gone to Porto with a group of friends and will stay in the city on Wednesday for sightseeing.

Advice from the Portuguese authorities for Atlético fans in Porto

The defeat in the league against Mallorca last Saturday has touched the spirits and they are “a little pessimistic”, but they do not give up. “When the game starts we will begin to trust,” he adds.

The group warms up hours before the meeting and immediately begins to chant Luis Aragones They are followed by all the tables on the terrace, from which several red-and-white flags hang.

The hymn is also heard, which attracts the mattress workers who walk along the river bank and join together to sing with them.

The spirits do not decline although the team is not going through its best moment. “The feelings that an athletic man has before a game are always positive., because we know that Atleti is capable of the best and the worst, “Raúl, recently landed from Madrid with his 14-year-old son, told EFE.

Raúl and his son took the antigens that they had to present to board and that they will have to teach again to enter Do Dragão in Madrid, at the mobile test station located in front of the Metropolitano, an initiative of the Athletic Front.

Other fans already did it in Portugal, as is the case of José Luis, from Cáceres. This young man, his sister and his parents had it done for him on Monday at a pharmacy in Figueira da Foz, where they have rented an apartment for the bridge.

“We always trust, we will surely be in the eighth,” he told EFE, convinced.

THEY HAVE ALREADY ‘WON’

If Atlético do not go to the round of 16, at least they have the experience of the trip, as another fan, Almudena, who has gone to Porto with her partner, Luis, recalls.

“At least they take away the ‘bailao’, we have come and we have enjoyed it,” he says with a laugh. “When you go on a trip it is a lot of fun, you suffer even less”, agrees his partner.

Almudena and Luis took advantage of the bridge to tour Galicia in their camper van and have finished their trip in the Invicta after passing through other Portuguese cities, such as Braga or Guimarães.

The atmosphere in Porto is good –“You are visiting the city and people yell at you ‘Aupa Atleti!'”, Almudena says- although it shows that there are fewer people than other times.

“I suppose that the covid and on top of the new test requirements that they have now put into the country and the stadium, everything limits,” laments Almudena, who says she was in another game in the same city ten years ago and that was a “show”.

But those who have traveled to Porto today have not been stopped by the coronavirus. “We come here to have a good time and above all to take the tie”, Raúl ditch.

(1-2): Atlético hit and suffer to beat Porto and go to the round

The bets are against Atlético