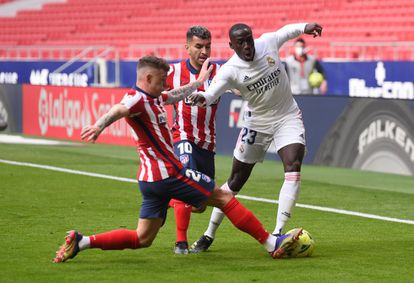 For Ferland Mendy, the season with Real Madrid is over. The left-back suffers from shin splints, according to the club reported on Tuesday, and will not be available in the three remaining League games (Granada, this Thursday; Athletic, on Sunday; and Villarreal, on the 23rd). Even the diagnosis endangers his participation with France in the European Championship that starts on June 11.

This loss abounds in the physical calamity that the white defense is suffering in this final stretch of the season, which right now also has Carvajal, Lucas Vázquez, Sergio Ramos and Varane in the infirmary. These last two, the starting pair of centrals in Zidane’s starting plans, could arrive in time for one of the remaining matches, although not for Los Cármenes (22.00, Movistar LaLiga). Yes, Álvaro Odriozola is expected despite the fact that he ended the duel against Sevilla with a small overload on his left leg. Zizou will travel to the Andalusian city with four defenders from the first squad: in addition to San Sebastian, Nacho, Militão and Marcelo.

Mendy’s health has been broken in the last month. Since the return of the Champions League quarter-finals at Anfield, he has only been able to play one hour of the decisive duel at Stamford Bridge against Chelsea, a date he arrived after rushing the recovery deadlines. In this section he has missed six commitments after being irreplaceable for Zidane throughout the course. Until then he had only been a substitute for five days by rest. Unless the French coach provides otherwise, the Frenchman’s injury opens a new door for Marcelo, who is completing his poorest course since he arrived at the Bernabéu 14 seasons ago. On Sunday he was substituted midway through the second half by youth squad Miguel Gutiérrez for technical reasons.