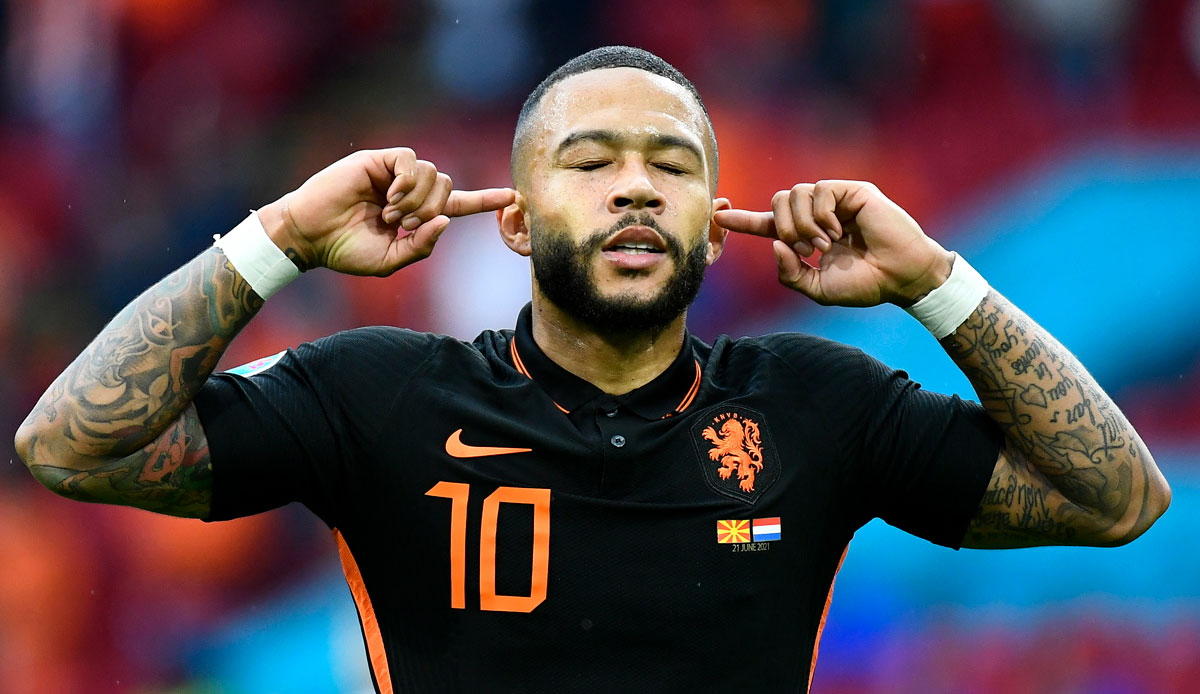 After two not entirely convincing performances and burgeoning criticism, striker Memphis Depay (27) found his best form in the final group game of the Netherlands and thus in time for the round of 16 against the Czech Republic on Sunday (6 p.m. in the LIVETICKER). That has to do with two factors.

When the Romanian referee Istvan Kovacs whistled the final game of Group C between the Netherlands and North Macedonia at halftime, Memphis Depay was on the ball in midfield. Instead of being allowed to initiate another attack by his team, he picked up the ball and handed it to Kovacs personally . As if he wanted to say: Take good care of it and give it back to me intact after the break, I still need it!

Not only was it clear to Depay at this moment that he had a lot to prove on that Monday evening. He succeeded brilliantly: After his 1-0 in the first half, he later played Georginio Wijnaldum’s 2-0 with a great solo and then initiated his goal to make it 3-0. For Depay it was a liberation: While his team had blossomed into one of the positive surprises of the EM with the victories against Ukraine and Austria, their supposedly best player himself initially fell short of the high expectations.

Instead, the celebrated heroes of Amsterdam were midfielder Wijnaldum and Denzel Dumfries, who was involved in all five of the Netherlands’ goals in the first two games and who worked the right flank in coach Frank de Boer’s 3-5-2 system. Before and at the beginning of the tournament, that system or, conversely, the turning away from the almost sacred 4-3-3 was the favorite topic of discussion among fans and experts, soon it became the role of Depay.

Well, it wasn’t as if Depay played really badly, by no means: against Austria, for example, he scored the 1-0 penalty himself and initiated the 2-0. But people in the Niederladen had expected a lot more from him: more impulses, more commitment, more altruism, more goals. His almost absurd miss shortly before the break was also remembered from the Austria game.

The Oranje fans celebrated and de Boer tried out the 19-year-old Ajax talent Ryan Gravenberch in midfield, only Depay took the game seriously. Although he did not do without his typical and occasionally uncomfortable gesticulation, moserning and standing still after losing the ball, he at least pushed it into the background with his offensive performance. Depay was a constant asset from the start, involved in almost every attack and ultimately in all three hits.

Mainly responsible for his increase in performance were probably two factors: the attack partner and the transfer theater about himself that had ended two days earlier.

Unlike in the first two games, Depay stormed against North Macedonia not next to the massive Wout Weghorst from VfL Wolfsburg, but next to the more agile Donyell Malen from PSV Eindhoven. The team therefore lost a ball-fixing breaker in the center of the storm, but Depay had a like-minded playmate with whom he was visibly more fun playing football.

“There is a good connection between the two,” said de Boer. In fact, both the first and the third hit were preceded by dreamy combinations between Depay and Malen. Combinations that would be unimaginable with Weghorst. It is quite possible that de Boer will now also bet on Malen in addition to Depay in the round of 16 against the Czech Republic on Sunday.

For the 22-year-old Eindhoven striker, the EM is a stage to attract bigger clubs. Most recently, there was speculation about a possible 30 million euro change to Borussia Dortmund. While his future remains open, Depays has been clear since last Friday. After playing poker for around a year, he will be transferring from Olympique Lyon to FC Barcelona for the coming season.