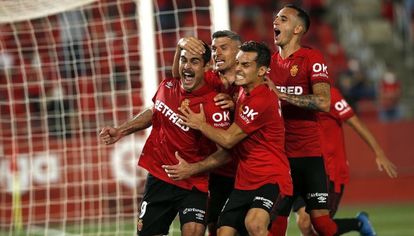 Mallorca returns to Primera. The Balearic team did not even need to jump to the field to guarantee the ticket back to the highest category, because Almería played this Tuesday in Cartagena (3-2) and the vermilion team celebrated their promotion from their hotel, in the Canary Islands , where on Wednesday they will face Tenerife. The soft cushion of advantage points that the Majorcan team reaped throughout an almost perfect course made the ascent a more than announced outcome. He has three dates left. Unattainable Espanyol, Mallorca has been a meritorious runner-up.

The 75 points he has accumulated so far are a record in the club’s history, he has never before managed to amass such copious loot. The balance of 22 victories has made the passage through the Second Division ephemeral. And that, with the relegation, the team lost its captain. At the end of last season, Vicente Moreno changed Mallorca for Cornellà-El Prat. The flight hurt among the fans but in the offices of Son Moix the asepsis of business management dominates more than the candor of feelings. The Board of Directors is chaired by Andy Kohlberg, a heavyweight on the club’s property. Accumulate hours of flight in the boxes of professional sports. Kohlberg is a key shareholder and vice president of the Phoenix Suns, in the NBA. Before that, he was a professional tennis player on the ATP Tour circuit for 10 years.

When landing in second, the bench was put in the hands of Luis Garcia Plaza with the aim of recovering the lost elite as soon as possible. And the Madrid coach has been able to get the most out of some players who, in some cases, had an almost family bond with Moreno. Goalkeeper Manolo Reina, Raíllo, Sastre, Salva Sevilla or Lago Junior were already props for Mallorca that, in 2018, managed to ascend to the Silver Division after a year in the well of Second B. Moreno commanded that squad, which, later , chained the promotion to First. In that team was also Abdón Prats, the forward of Artà, the boy of the house who has now become a benchmark of the club. “Being able to experience all this with this shirt is the greatest thing in the world,” he acknowledges, celebrating the good progress of the team. Mallorca has Luka Romero on the squad, the Argentine teenager who last June took the spotlight when he made his debut in the First Division when he was 15 years old and little, neither more nor less than against Real Madrid. This year it has barely a hundred minutes played, spread over six games. Luis Garcia Plaza’s Mallorca has forged its optimal season based on reliability and consistency. From the beginning, he set his foundations on defensive solidity. After the first twelve competition matches, the Balearic team had only conceded two goals. At that time it was the least thrashed team in the First and Second Division.

A bolt from the back that has allowed him to live the entire course in the privileged area despite not having plenty of gunpowder. The team’s top scorer is Amath Ndiaye, with 9 goals. In the table of gunners he occupies the eleventh position, with thirteen goals less than Raúl de Tomás and seven goals less than Rubén Castro, the veteran Cartagena striker who, with his two goals against Almería this Tuesday, helped propel Mallorca back to First.