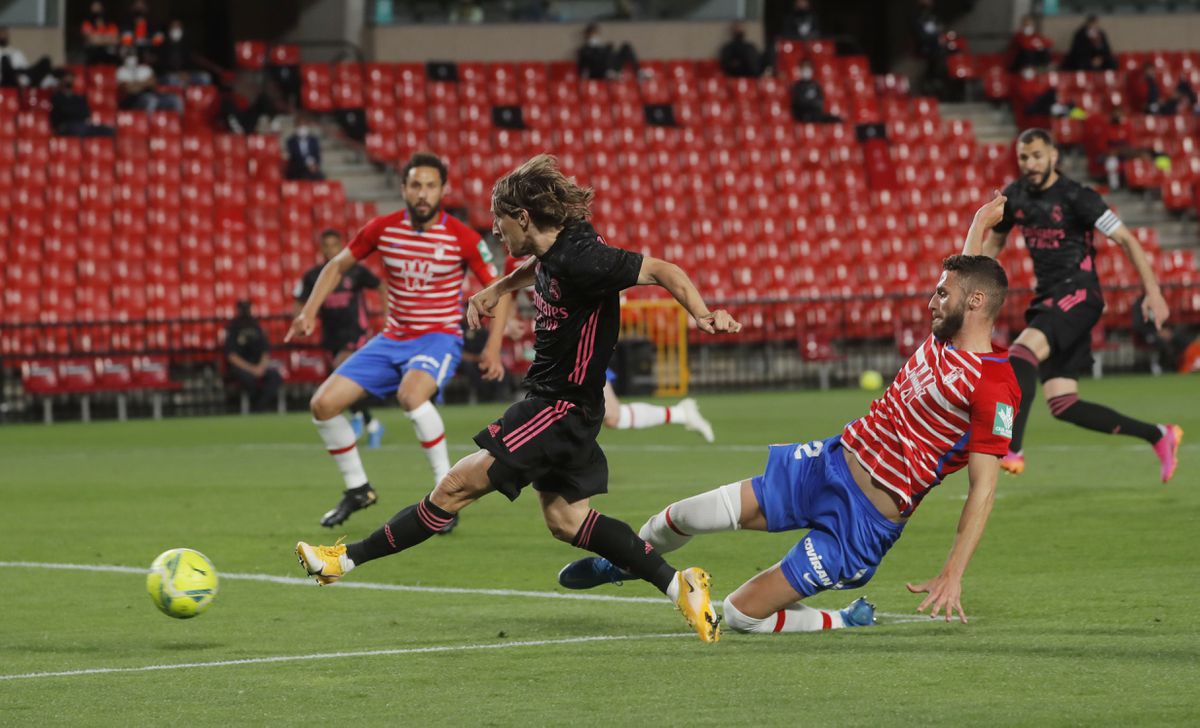 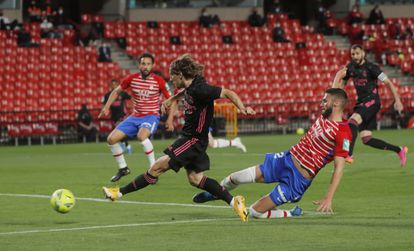 Real Madrid did not hand over the keys to the title. Not yet, at least. Clinging to his nursery, he almost scratched a victory in Los Cármenes that keeps him standing in the League. Injuries and fatigue have forced Zidane in this final stretch to move the dice like never before scratching in the depths of the locker room and even Valdebebas. In this survival exercise, with the Sierra Nevada in the background and the Alhambra hidden to one side, it was three beardless people (Miguel Gutiérrez, Rodrygo and Marvin) who raided their night session.

And, when he was rushed a quarter of an hour from the end with Jorge Molina’s goal, another stranger from the goal, Odriozola, reappeared, as in Cádiz, to settle the matter. The white escapism added another episode to continue hooked with one hand to the League. They remain two points behind Atlético and, if the rojiblancos want to be champions next Sunday, they will have to defeat Osasuna and hope that their rival will not defeat Athletic in Bilbao.

Zidane played what was left of his life in the tournament with one of those lineups with an experimental air that distinguished him so much and that he avoided so much for much of the season. From the outset, the discovery in the defense patched it up with two boys from the Factory (Marvin and Miguel Gutiérrez). Odriozola followed him from the band and Marcelo, without yet knowing for sure why, at home. And from the middle of the field forward, the Frenchman saved the best of his team against Sevilla (Kroos), Asensio and Hazard (second game on the bench after his poor appearance at Stamford Bridge), and gave a reel to Rodrygo, invisible after his return from injury.

The children of La Fábrica did not go on an excursion to the Alhambra. As soon as he started, Marvin threatened that, following the shouting instructions of foreman Casemiro, he left the first footsteps of Madrid on the right. But the one who really left his mark was Miguel Gutiérrez on the other wing. If anyone didn’t know who his guardian was, the 19-year-old gave a good clue in the 0-1 action. The full-back executed a wonderful spoon that made everyone rewind the videos of Raúl, his Castilla coach. With this maneuver, the beardless man dismounted the Granada defense, Modric caught Domingos Duarte’s back and, seven meters away (never in Madrid had he scored a goal from such a short distance), he did not tremble against Rui Silva.

The Croatian scored the target, but the youth squad’s pass was underlined in the notebooks. At the start he had already surprised a couple of times by getting into the center, in the best style of the late Marcelo, to mess up the local framework. All his expertise in attack, yes, after a while contrasted with his paralysis in a play in which he ended up caged in a gift that failed to finish off a Fede Vico who entered another slow attack.

The goal emboldened Granada, which, with nothing to tie up, threw itself at Courtois’ beard. The reaction also did not displease the boys of Zidane, who saw the opportunity to run, and more with Vinicius in the meadow. The Brazilian had it, who took advantage of a robbery in the middle to travel meters in freedom until he reached the front of the area and, when he only had to adjust it, that only became his usual Himalaya. His shot was thanked by Rui Silva. With Rodrygo the story was different. His littermate made it clear that his peephole is better adjusted. He took advantage of a dispute won by Marvin and clinically adjusted to the other suit. He had not scored since November at San Siro. In between, an injury and an inconsequential return until his time in Los Cármenes. The play was born from Marvin, who a few minutes earlier had had a very similar shot that ended up out of focus. From the break, however, the timid bullet from Mallorca did not return, replaced by Odriozola.

The resumption continued with the same scenery. Granada continued to strive and Madrid did not stop striking. The absence of Yangel Herrera in the center opened a hole that Eteki never managed to alleviate. Not even 20 seconds had passed when Valverde had it after a play at the first touch with Benzema acting as point guard. And again Vinicius, who threw it back at the doll.

Unable to score the third, the meeting entered a border area, at the expense of news in the area. And there, an almost forty-something like Jorge Molina paints them. He caught Odriozola stunned and flocked a rejection after a good stop by Courtois to Luis Suárez to turn the night around. However, the thriller barely lasted two minutes. Those who took the San Sebastian to retaliate and Benzema in thanking a gift from Rui Silva to tie the night. Madrid did not give up in Granada.