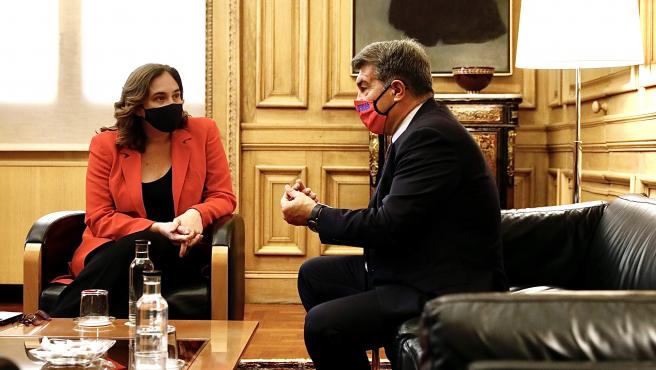 The FC Barcelona contemplates the possibility of playing in the Lluís Companys de Montjuïc Olympic Stadium during a “short period“of time during the works of the ‘Espai Barça’, request made to the Barcelona City Council in a meeting held this Thursday.

The meeting between the president of FC Barcelona, Joan Laporta, with the mayor of Barcelona, Ada Colau, in the Barcelona City Council has allowed the club and consistory agree on improvements in the ‘Espai Barça’, in order to start the works, in addition to contemplating that scenario of playing in Montjuïc, a fiefdom of municipal ownership.

The meeting discussed the possibility that Barça could play at the Olympic Stadium during “some period” in which the Camp Nou requires that there be no public. The idea in which the club works is that while the work is running never miss a minimum capacity for about 80,000 fans.

“However, it has been recalled that, for a short period of time, the Camp Nou will not be able to host matches or spectators, which will force the Entity to tentatively search for a new home, and this will most likely be the Lluís Companys Olympic Stadium “, said the entity.

Laporta initially held a private meeting with the mayor and the second deputy mayor of the city, Janet Sanz, to expose small changes in the project ‘Espai Barça’ In order to start the works shortly, which will require some adaptations of the project, as announced by the club.

Previously, representatives of FC Barcelona led by Joan Laporta, the vice president of the institutional area, Elena Fort, the manager in charge of ‘Espai Barça’, Jordi Llauradó, and the incoming CEO, Ferran Reverter, met at the Saló Consolat del Mar with the head of Ecology, Urban Planning, Infrastructure and Mobility, Janet Sanz, the Urban Planning Manager, Laia Grau, the Chief of Staff of the Deputy Mayor, Marc Rius, and the advisor to the Deputy Mayor, Roger Clot.

“FC Barcelona has expressed to the City Council the Willingness to promote a series of small architectural changes in the Espai Barça project to make it more sustainable and technological. The representatives of the Club have argued that after years with the project stopped this has become obsolete and that the improvements to be made could make the work a little more expensive, “the entity acknowledged.