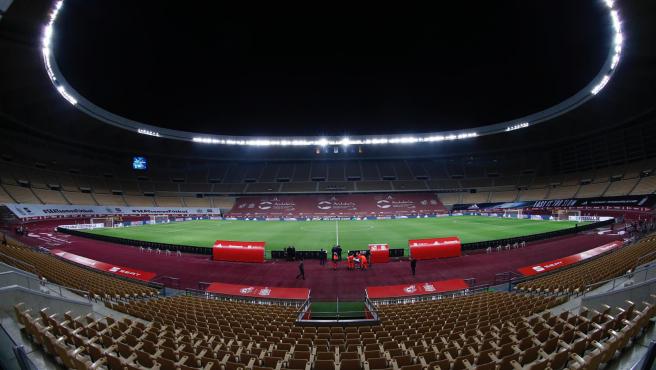 There are only a few weeks until the popular tournament of the Euro, what will finally take place of June 11 to July 11, 2021, and UEFA confirmed that the Sevillian stadium in La Cartuja will be officially the headquarters of the competition in Spain, replacing the San Mamés stadium (Bilbao), due to the restrictions established in the Basque Country due to Covid-19.

In this way, the organization explained that the matches of the international tournament that will take place on June 14, 19, 23 and 27 in Spain They will meet in this mythical space in Seville, together with the support of the Junta de Andalucía, which will allow the entrance of approximately 18,000 spectators until the 30% of the allowed capacity is reached.

The stadium is immersed in the organization and preparation for the matches to be played by the Spanish team in the Eurocup. Thus, you already have a new installation of lights in the dome to increase the projection of light during the tournament.

Regarding its facilities, La Cartuja has a capacity for 60,000 spectators, although only a capacity of up to 30% will be allowed. The playing field is made of “natural grass of 105 meters x 68 meters”, it is composed of five changing rooms equipped for the players, an anti-doping control room and a “permanent surveillance system with color TV cameras throughout the Stadium” , added on the official website.

On the other hand, the space has an area set up as a press room equipped with a TV circuit, 150 positions for photographers on the ground, 48 private boxes, reception rooms, indoor parking with capacity for 264 vehicles, and exterior for 20,000 vehicles.