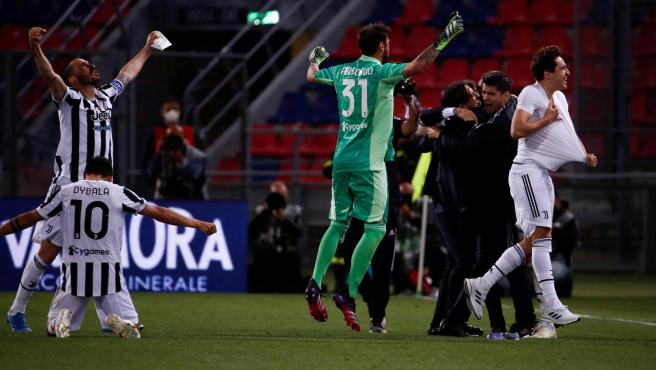 The Juventus, who beat Bologna 4-1 without the Portuguese Cristiano Ronaldo, and Milan, who beat Atalanta 2-0, qualified this Sunday for the next Champions League on a last day of the A series in which Naples, who had enough to win at home to Verona to enter the European Cup, did not go beyond 1-1 and had to settle for the Europa League.

Serie A ended him Inter Milan champion (91 points), with Milan second (79), Atalanta third (78) and Juventus fourth (78), while Napoli dropped to fifth place with 77.

After an intense year, marked by ups and downs and difficulties, the Andrea Pirlo’s Juventus managed to get into the Champions League on the last day thanks to its resounding triumph in Bologna and the unexpected stumble at Naples against Verona.

And that the duel of the year for Juventus started with surprise: Cristiano Ronaldo was a substitute for the ninety minutes, apparently by technical decision agreed with the coach, but his teammates replaced him in the best way.

The Spanish Álvaro Morata, with a double, Federico Chiesa and the French Adrien Rabiot, helped by a great performance from the Argentine Paulo Dybala, decided the comfortable 1-4 achieved in Bologna, in a game already widely on track after the first 45 minutes (0 -3).

But the news from Bergamo, where Milan beat Atalanta, were not positive, and neither were those that came from the Maradona stadium in Naples, where the Neapolitan team went ahead at game time thanks to a goal from Kosovo defender Amir Rrahmani .

For ten minutes Juventus’ nightmare was taking shape, but in the 69th minute of the Maradona stadium duel Davide Faraoni appeared to equalize the match for Verona, who had no great goals on the table.

But his attacks were without reward and the duel ended with a 1-1 draw and final chill, with a header from Petagna ending outside by a few centimeters.

The final draw left Napoli, who started the day as favorites to play in the Champions League, in the Europa League and paved the way for Juventus and Milan.