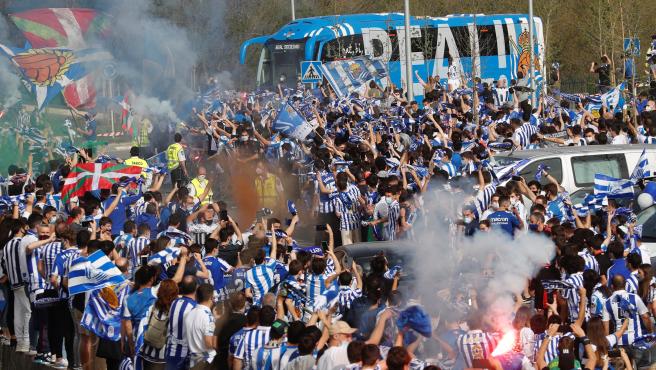 Hundreds of fans of the Real society They have come this Friday to the Zubieta facilities to say goodbye to the team, which travels to Seville this Friday to play this Saturday the final of the Copa del Rey.

Although the collective Bulge, who had summoned the fans outside Zubieta, had called to respect safety distances to avoid contagion by covid-19, during the departure of the team bus there have been crowds, as happened on Thursday in Lezama at the farewell to the Athletic club.

The fans had arranged themselves on the side of the road that connects the Z7 field in Zubieta with the national NI, a device ordered and controlled by the Urban Police and the Ertzaintza.

During more than an hour of waiting The fans waved their flags and scarves and sang songs of support for the team, which started on the official bus minutes before 11.00.

By the time the bus left, many fans jumped the security lines and crowded in front of the bus, which slowly left the area.

Fans have also come to say goodbye to the team at the Hondarribia airport, from where the txuriurdin expedition travels to Seville.