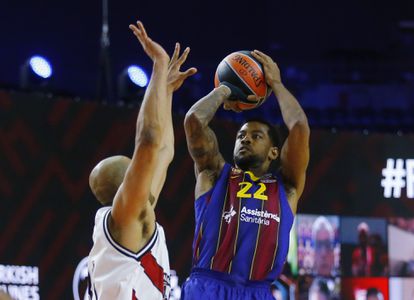 A shot from Cory Higgins with five tenths left to go gave Barcelona an agonizing and suffering victory against a demanding and brave Armani Milan. The Barça thus put an end to the crossing of the desert, absent from the final phases for seven years. The European crown will be played with Anadolu Efes this Sunday (20.30). The last time he played in the final and was crowned was one night in May 2010 in Paris, where a dream match culminated, with Navarro, Ricky Rubio, Pete Mickeal … and with Xavi Pascual as coach. Since then nothing, just that appearance in a semifinal, in 2014, that he prefers not to remember because he was overwhelmed by Real Madrid.

In Cologne, against Milan, it took a world for Barça to respond to the airs of greatness that it has acquired this season, with Mirotic and Pau Gasol, with the catalog managed by Saras Jasikevicius. The Lithuanian coach needed his supporters more than ever in an enormously demanding match. The first part was great for Barça, but the disaster in the third quarter weighed heavily on them. He stopped dominating the rebound, he ran aground in attack, he was riddled by Punter, Shields and Sergio Rodríguez. The Barça scoring drought combined with the stream of points from the Milanese caused havoc. Barça accused the dizzying change, from the comfortability of 51-40 at halftime, to the tormenting and threatening 61-69 eight minutes later. The azulgrana team was entering a zone of darkness. He was forced to shut down the bleeding from Punter. Jasikevicius assigned his marking to Bolmaro. The Argentine guard started well and Messina gave his best man a break. Barcelona’s defense paralyzed Milan’s attack and the scoreboard closed like a fist, with very short advantages for both.

Eight minutes to go and the game was going on in a fist. Every little detail, success or error began to weigh like lead. Jasikevicius and Messina challenged each other with their two bases at the same time on the court. The Lithuanian also used a zone defense in small doses. Barcelona blocked Milan’s attack, but he did not finish firing his (77-76). The seconds, the minutes passed faster than the movements of the marker, equal to 78, to 80 already in the final bars. Calathes was injured. Bolmaro definitely took over the handle.

A triple from Punter again leveled the game at 82. There was a minute left and the referees went to see a confusing play on video. They gave the ball to Milan. He used up his time of possession in front of a very well planted defense. The agony was summed up in 50 seconds, in 31 after a shot missed by Bolmaro. After scoring 23 points, Punter missed seven seconds to go. Higgins took the ball, crossed the court and scored the shot of the game: 84-82. There was half a second left. Milan entrusted their last cartridge to Evans, although in a hurry, after a foreshortening with Pau Gasol on top of him, he failed. Barça was finally in the final. It will be the eighth in its history, with only two titles, the one in Paris in 2010, and the first, in 2003 at the Palau Sant Jordi, with Bodiroga in command on the pitch and Svetislav Pesic on the bench.

The semi-final was a succession of appearances and blackouts by both teams. Abrines saw them and wished them to respond to the mobility of the Serbian forward Micov and Kuric to avoid the jump shots of his American compatriot Punter. On the other side of the court the same thing happened to the American interiors Leday and Tarczewksi against Mirotic and Pau Gasol.

The ability of the Sant Boi center to score from outside and to take advantage of the assists elaborated and telegraphed by Calathes marked the first cracks on the scoreboard. The two teams stuck to their instruction books, the Milanese spotless in the making, no losses. Barcelona made up for its worst record in steals and losses with superior rebounding and intimidation. Sergio Rodríguez and Shields answered Pau Gasol’s first salvo of triples, but Abrines and Calathes added to the outside bombardment in the second quarter. The Barça advantage grew to 11 points at the end of the first half (51-40). A mirage for what awaited him afterwards. Higgins had to come to the rescue.