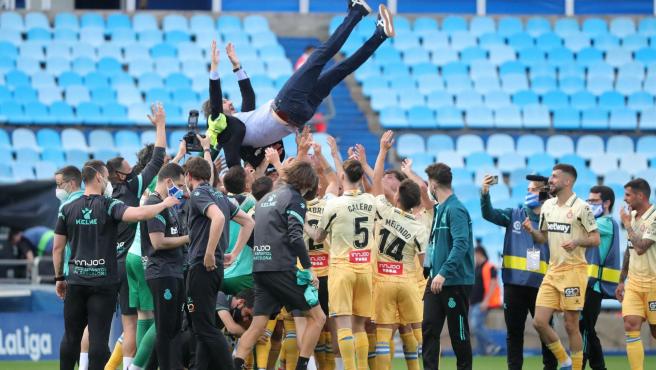 The RCD Espanyol confirmed his return to the Santander League just ten months after the painful relegation to the Second Division thanks to the draw achieved this Saturday against Real Zaragoza (0-0), with four days remaining to finish the championship, one triumphant return to elite football in a season to frame the ‘parakeets’.

Vicente Moreno’s team was clear dominator of the category and made good all the predictions that cataloged him as the great favorite to be promoted to First. This Saturday, after drawing at La Romareda and Almería’s stumble, Espanyol reached a 12-point lead-plus the golaverage in favor- over the Andalusians, with 12 remaining to play.

The blue and white did not need their top scorer, Raúl de Tomás, who did not play because he had tested positive for coronavirus a few days before, but it was one of the keys to the season. The former Rayo, along with another former like Embarba, is the top scorer in the category with 22 goals. In addition, the sobriety of Diego López under sticks, the talent of David López in defense or the outbreak of Javi Puado have been vital to return to First.

The final whistle was a liberation for the Catalans, who they have accumulated 16 games without losing and seven victories in the last nine gamesFigures of a champion team that have had a prize with almost a month left to finish the League.

For its part, Albacete will remain bottom but achieved a fundamental victory to stay alive in the fight for permanence. The Manchegos beat Ponferradina (0-1) thanks to a goal from Álvaro Jiménez, from a penalty, and they managed to keep the advantage in a second half in which they were favored after the direct red to Adri Castellano.

Alejandro Menéndez’s team is four points from salvation, while the Bercianos move away from the dream of the ‘playoff’. The defeat leaves them five points behind Girona and four against Rayo when both have to play their games on Sunday and Monday, respectively.