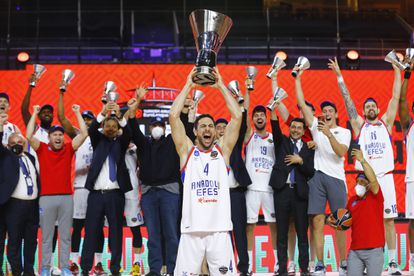 A dazzling Anadolu Efes was crowned European champion after liquidating a Barça that broke down at the climax, in a final in which he did not know how to unleash the talent he gathers and is supposed to be. The defeat shattered the dream of a team built with the highest ambition, that of obtaining the third European title for the club, after those of 2003 and 2010. It eluded him once again. It was their sixth lost final, a pitcher of cold water for a team that was overflowing with optimism after dominating the regular phase of the Euroleague, although it already gave some worrying symptoms of how expensive the loopholes of their game could cost in the quarterfinals. against Zenit of Saint Petersburg.

The team led by Saras Jasikevicius was outmatched in the Cologne final by a rival who has been knocking on the door of glory for a long time thanks to their exceptional exterior duo. The Serbian Micic and the American Larkin perfectly played the leading and decisive role that they have used for two years, since they lost the previous final against CSKA Moscow in 2019 in Vitoria. Barça, on the other hand, was constrained by how long it took Mirotic to show signs of life. His franchise player did not let go of his arm, did not score until the end of the third quarter. Too late. The final demanded much more of him, although he finished with 11 points and nine rebounds. But this time he lacked personality to take on much more weight in the game and counteract the command that Micic and Larkin wielded.

Nor was the Greek point guard Calathes, very blurred in a game he played after recovering at forced marches from the sprained ankle he suffered in the semifinal. The weight of the Barça game fell on Higgins, Kuric, Davies and Bolmaro. They could not with an Efes that dominated since he rallied the 10 points with which Barça stretched the rope in the first 11 minutes (25-15). From there, the framework that Jasikevicius set up fell apart. He lost his footing very quickly. Efes’ ability to blow up games is well known thanks to the offensive talent of almost all of its players.

Micic and Larkin added 46 points and the rest of their teammates accompanied them adequately. They gained an 11-point lead in the third quarter (41-52). And from there they took the baton. Barça reacted and thanks to Higgins and Kuric they unblocked their attack and reached a level of 72 points with four minutes remaining. But Larkin and Micic had already taken over the stage. Mirotic’s final reaction fell short. The Montenegrin power forward took too long to emerge.

Jasikevicius dressed the end in extreme dramatic tension from the start, as if he himself were the one in charge of tying up Micic and Larkin. The task was unexpectedly entrusted to Claver, who appeared in the starting five to deal with the Serbian base. Higgins paired up with Larkin. And Calathes took Croatian forward Simon. Jasikevicius set the pace with a different strategic framework than usual, topped off with a defense at times in the zone, with many changes and aids that often ended with Davies putting pressure on the Turkish outside duo.

Efes found the first offensive response by supplying balls to Sanli. The Turkish center scored the first eight points for his team. Davies responded, exuberant in his physical display and his tap dancing under the rival rim. The one from Philadelphia answered Sanli very early with 10 points, in that stretch in which the outside game did not move the score.

The atmosphere soon warmed up. The referees punished the tantrums of Jasikevicius with a technique and shortly after those of Ataman, the Efes coach. Barça made cash with its strategic audacity. But his 10-point lead disappeared like smoke. The relays changed the scenery. Larkin began to produce, Micic pulled his shoulder slightly, like Pleiss in the inside game, although the German player was injured midway through the second quarter. The Barça defense conceded too many free throws. Efes rallied and moved seven points ahead (29-36).

The alarms went off at Barça, which, unlike Efes with Larkin and somewhat less with Micic, could not find a way for Mirotic to warm up. The break came and the leader of the Barça team had not captured any rebound and was with zero points after missing four shots and not taking any foul on the defense to which Singleton and Moerman submitted. Neither the brief irruption of Pau Gasol had the offensive impact of other times. Kuric and Bolmaro came to the rescue and relieved their team, which reached the break 36-39 as the lesser evil.

The problems of the Barça were aggravated in the resumption. Jasikevicius resorted to the classical scheme and Micic and Larkin struck on the defense of Calathes and Higgins. The Serbian base punished the marking of the azulgrana. Jasikevicius turned to Bolmaro. But the Efes was flying. If they didn’t score their outsides they doubled balls for Dunston or Moerman to execute. Mirotic still did not appear. He barely recorded two free throws and Pau Gasol with one. The Turkish team took the lead by 11 points (48-59). Two triples from Higgins and one from Mirotic, his first basket in play, softened the penalty before tackling the final round with 58-65 on the scoreboard.

Efes was better, they masterfully managed their advantage and Barça was in tow, desperate, on the way to their sixth defeat in the eight European finals they have played and with the disappointment of not having been able to give the measure expected of their impressive campus.