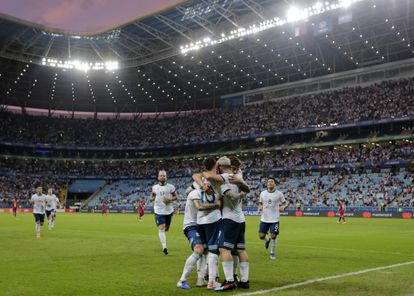 The plans for the Copa América 2021 have received another tumble. Conmebol, the governing body of South American football, has withdrawn the tournament headquarters to Argentina due to the Covid-19 crisis in the country. On May 20, the same authorities took away the headquarters of Colombia due to the social instability that has shaken the country in the last month. However, Conmebol has assured that it will assess the proposals of other countries to organize, at the last minute, the tournament that is set to start on June 13.

The maximum tournament for soccer teams in America was to be organized in 2020. The pandemic frustrated the organization of the competition that was to be held in two host countries: Argentina and Colombia. It was the first time that two venues had distributed tournament matches. By 2021, with the start of vaccination against the coronavirus, the picture seemed unclear. On April 28, protests began in Colombia against the tax reform that the president, Iván Duque, had proposed. The demonstrations escalated despite Duque withdrawing the bill. After a troubled month, more than 50 deaths and thousands of injuries have been registered by the clashes between the police and the protesters.

The Government of Colombia asked Conmebol to postpone the Copa América. The South American body immediately rejected the measure and announced that Argentina would take over the entire tournament. From the Alberto Fernández Administration they were cautious about organizing the event due to the health crisis. Argentina faces the second wave of covid-19: it has added more than 3.7 million infections since the beginning of the pandemic and more than 77,000 deaths. In the last 14 days, Argentina has reported more than 380,000 infections. This Sunday, hours before the announcement of the Conmebol, the Minister of the Interior of Argentina, Eduardo de Pedro, had indicated that it was “very difficult” for the tournament to be held there.

Before Argentina stopped being the venue, Conmebol began to receive requests from other countries, with better health conditions, to host the Copa América. One of them is Chile, according to Gonzalo Belloso, General Secretary of Conmebol. The agency received a proposal from the United States, organizer of the centennial edition in 2016, but it was rejected, according to the Argentine media. TN.

Conmebol maintains firm the dates of the qualifying rounds for the Qatar 2022 World Cup to be held between June 3 and 8. The matches will be held, due to the health emergency, without an audience.