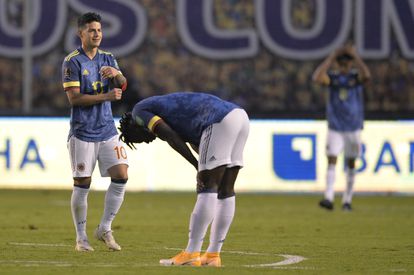 The social outbreak of Colombia has ended up taking away the headquarters of the Copa América. The South American Football Confederation (Conmebol) has almost immediately rejected this Thursday the last minute request of the Government of Iván Duque, which requested that the tournament be postponed at the end of a day in which several media had announced, without official confirmation, that the decision to be played only in Argentina, the other co-host, was imminent.

“For reasons related to the international calendar of competitions and the logistics of the tournament, it is impossible to move the Copa América 2021 to the month of November,” Conmebol said in a brief statement published on its website. After thanking President Duque’s “enthusiasm and commitment”, he pointed out that he will report in the next few days the “relocation” of the matches that were to be played in Colombia, without confirming whether Argentina will assume all of these appointments.

“The Government of Colombia will formally request the South American Football Confederation, through the Colombian Football Federation, to postpone the Copa América,” the Minister of Sports, Ernesto Lucena, had declared shortly before from Bogotá, without referring to the mobilizations. social. “We believe that the most important thing in an event of this magnitude is the capacity of the public,” he added, hiding behind the ravages of the coronavirus. The impossibility of fans in the stadiums “makes the Cup not an event we all dream of,” he reasoned after a meeting with other members of the Cabinet at the Casa de Nariño, the seat of Government. The response was immediate, with which Conmebol put an end to the improbable desire of the Duque Executive, surrounded for three weeks by the protests.

Despite the crisis, the Government had insisted on the need for the Andean country to host next month the oldest national team tournament in the world, which it saw as a unifying factor in the midst of anxiety. When the organization of the tournament had been questioned, Duque had defended that it was part of the difficult process of economic reactivation after the onslaught of the coronavirus. “It would be absurd if the Copa América is not played here when the Eurocup is going to be played”, I arrive to affirm the president when the protests were barely reaching their first week, but the situation has escalated since then.

Although Argentine President Alberto Fernández had been somewhat less enthusiastic about organizing the tournament amid the pandemic, on Tuesday he hinted that his country could be the only venue. “If they comply with all the protocols, we are willing to see the possibility of organizing it alone,” he told Radio 10. Argentina, however, does not have it easy either. This same Thursday he announced a nine-day confinement to avoid hospital collapse and the mayor of Buenos Aires has disagreed with the fact that it is played in the capital’s stadiums.

The unprecedented Copa América of Colombia and Argentina, which for the first time was to be played in two venues in two different countries, is scheduled between June 13 and July 10, but is still fraught with uncertainty. Although both nations are facing a critical moment of the pandemic due to the rebound in cases, which had already sown doubts about the viability of the tournament, it was the delicate internal situation in Colombia that ended up frustrating the dreams of the Government. The country accumulates fifty deaths in the framework of all kinds of protests, riots and clashes between protesters and police.

Sports have taken a back seat. Last week, several Copa Libertadores club matches were played amid interruptions by tear gas that came from the street, in images that were broadcast live across the continent. The duel between América de Cali and the Brazilian Atlético Mineiro had to stop five times, and the confrontation between Junior and the Argentine River Plate was also suspended for several minutes, both in the Caribbean city of Barranquilla. In Pereira, the game of Atlético Nacional de Medellín and Nacional de Uruguay started an hour late by the protesters. Even the bars of the Colombian clubs have joined the protests to demand that the tournament not be held.

The manifest purpose of this unusual edition has been to standardize calendars so that it can be played in parallel with the Eurocup. Like the European national team tournament, it was also due to be played last year and was already postponed until 2021 due to the pandemic. Then, a little over a month after the ball rolled, Colombia boiled over with an amalgam of demands and social mobilizations that ended up disrupting the plans of the leaders, who until this week insisted that the headquarters were firm. Colombia intended to host 15 games, including the final in Barranquilla.

Since the outbreak of the coronavirus more than a year ago, the measures of several South American governments to contain its spread – such as restricting the entry of foreigners into their countries, closing borders and prohibiting mass events – have had a strong impact on regional competitions. A domino effect that had already reached both the Libertadores and the qualifying rounds for the Qatar 2022 World Cup, which are delayed. The eighth date, in which Colombia should receive Argentina precisely in Barranquilla on June 8, also remains tinged with uncertainty.