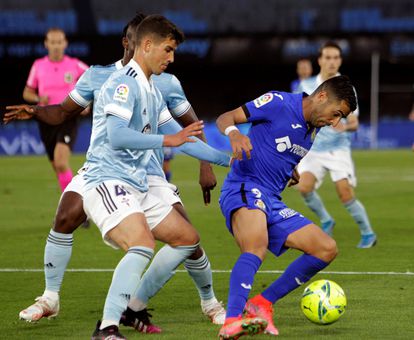 Celta gritted their teeth to win (1-0) against Getafe and engage four consecutive wins in the League. He surpassed him in a long-suffering match, nothing showy by the local team and disputed between emergencies by the Madrid native, who has barely beaten in one of his last eleven duels. Of course he did it in Huesca and it can be decisive.

Getafe played with the urgency that a team that seeks points to reach the goal of permanence is supposed to be. And it doesn’t just go through it. He deserved more in Balaídos, but left empty, unable to assert himself against an opponent who did the minimum to win and found the right goal of his goalkeeper to defend a booty that places him two points behind the European position held by Villarreal. Now he must attend to what the yellow box does in his visit to Valladolid, an appointment that Getafe will also be very aware of, three points above the pucelanos, who mark the relegation places.

Celta found himself with a sudoku game to do his football, squeezed by a rival who went over to his area. He had the lucidity to mix, to seek and find loopholes. He did not finish accommodating, always chased by a sticky bluish shadow, but he found spaces and, above all, he reached the goal. Nolito scored, able to find a center to the area at the far post and place it in the net. That was the climax of a first part of pick and shovel that punished Getafe.

“Strong, strong,” Bordalás shouted from the band to direct the pressure of his boys. They were strong, especially in the final stretch of the first part when Angel put Iván Villar to the test, excellent and feline, Enes Ünal had the tie in a header that crossed too much and even the side Olivera looked at the equalizer. Getafe must have achieved them, but he lacked aim, troubled as he was and even more so when news arrived at game time that Huesca, a direct rival in the fight to flee from the burning, had scored against Athletic.

The visiting domain redoubled. A Chilean from Ángel explained the greed of Getafe, which was ready to finish off in every possible way, which generated football with Aleñá’s talent and who joined the catalog of complaints and laments for a hand in the area, an action by Aidoo in which no penalty was awarded. It happened after a center by Cucurella in which the ball hit the right boot of the Celta center-back and then went to the arm, completely detached from the body. The decision seemed logical in irrational times. More illogical was that the game did not end in a draw.