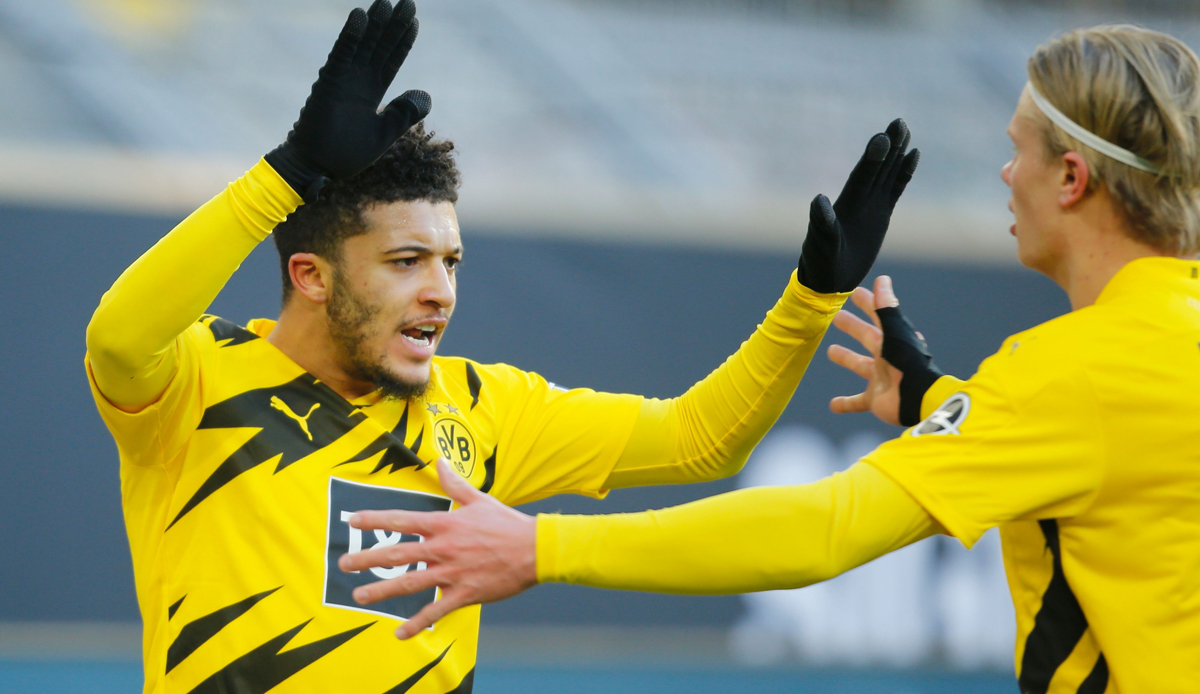 After a seven-week injury break, Jadon Sancho is immediately back in top form at Borussia Dortmund. It would be more important for BVB if they could keep the Englishman instead of Erling Haaland.

It is quite possible that the next sentence will have to be revised again soon. Nevertheless: Jadon Sancho scored the goal of the season for Borussia Dortmund.

“Jadon makes a very good impression on us, he is bursting with enthusiasm,” said Dortmund’s interim coach Edin Terzic recently. Sancho had just got his first season in the Bundesliga after a seven-week break due to injury (torn muscle bundle), but these 31 minutes in the 2-0 home win against Union Berlin already looked pretty good.

Since then, 270 more competitive minutes have passed. Sancho played 240 of them and was in the starting XI in each of the three games. He contributed two assists in the cup against Holstein Kiel, on Saturday in the top game against Leipzig he let the two important goals to 2-0 and the victorious 3-2 follow.

The Champions League hopes of BVB, without Sancho’s second goal, they would have got a damper two game days before the end of the season. The importance of this goal cannot be surpassed even in three days at the DFB Cup final. It is true that Borussia’s first title since 2017 would look good in emotional terms, especially in this season, which is full of many twists and turns. But for the reputation and the internal and external impact of the club, participation in the premier class is of greater significance.

BVB: That’s why Sancho is more important than Haaland

There, striker Erling Haaland, suffering from a bruise, could be out again, but Sancho would be the more painful loss in two respects. Although a lot in BVB’s game is certainly tailored to the Norwegian striker and in some respects there is also a kind of dependency on his depths, the will to win and, above all, the goals.

Sancho’s dribbling, his pace, the ideas and his ball skills are not only a real threat to every opponent, but also more difficult to knock out over 90 minutes than Haaland’s enormous physique. The 21-year-old’s skills are even more important for Dortmund’s offensive strength and it would be more important to keep Sancho instead of Haaland.

The chances that both will play at BVB in the coming season are also there thanks to the financial impact of the Corona crisis on the top clubs in Europe, which are usually so affluent. There is still a lull in the transfer market, the demands of the Westphalia for Sancho – 85 to 100 million euros transfer is the talk – a club must first be able to meet.

That may not be very likely at the moment, but it doesn’t mean anything. Sancho still has one year of contract, so the required amount for him is slightly lower than in the previous year. Sports director Michael Zorc recently confirmed that, like last summer, there is a gentlemen’s agreement with Sancho, which, in addition to the economic conditions, is linked to a certain point in time until an interested club would have to put the money on the table. It could very well be that this will be the start of the training camp again at the end of July or beginning of August.

According to information from SPOX and goal Sancho is aiming to say goodbye again in the summer, but nothing will happen without a wealthy prospect. “We don’t have to look for this club. We have to look for the player, if at all,” said Zorc den Ruhr news.

“The fans have been waiting for a trophy for a long time. This year it is time to bring a trophy to Dortmund,” said Sancho a few days ago. It is quite possible that in this condition he will follow the most important and most emotional goal of the BVB season on Thursday.