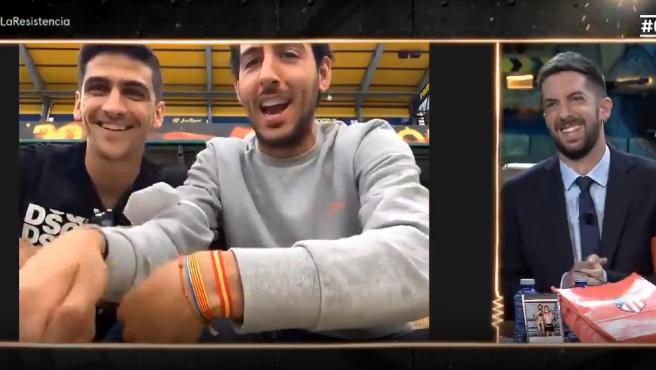 Gerard Moreno Y Dani Parejo have been two of the footballers who have passed in recent months for The resistance, and in both cases they showed great complicity and good vibes with David Broncano. Therefore, on the occasion of the achievement of the Europa League by Villarreal, the presenter called them to congratulate them and caught them in the middle of a party at the Estadio de la Cerámica.

With the rojiblanco Koke present, with which the success of Spanish football was very well represented, the jienense caught the yellow footballers ‘butt’. Specially to Parejo, who was totally come up. The first question sums it up: “How are you doing? Affected!”. The midfielder’s response was clear: “How was Koke going on Saturday?”

Broncano thanked Moreno for keeping his promise with the dedication of the goal. “He was handsome. Dani’s assistance was better than yours from the fuet,” joked the forward. The presenter was trying to redirect the questions, when Parejo interrupted him: “Well, well, well … the music is starting here.” “With how little you like the party, eh, Dani …”, replied the comedian. “There is a curfew here, not there, you bastards!”

Of the three footballers on the screen, two of them are going to the Eurocup. Not even, but he doesn’t care. “Que no pasa, na! Yo, Spanish, look, look (points to a bracelet with the Spanish flag). May they win it. Me, full, “he replied with a laugh, while Gerard drank a drink of what he described as “water in a balloon glass”.

Finally, Parejo sent a message to Koke on behalf of his cousin, because the brother of the Atlético captain sent him a message of congratulations for the title. Both are part of the same generation of footballers and they coincided in the lower categories in Madrid and, later, in the national team, apart from facing many times as rivals.