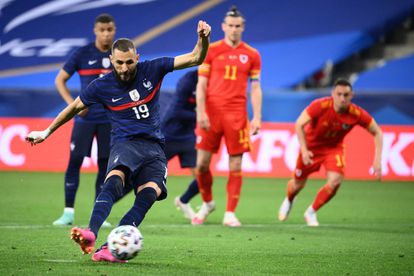 October 2015 sounds even prehistoric in times when a thousand things happen every minute. Five years and eight months later, Benzema wanted to put it on hold. He asked for the ball, went to the penalty spot, which was why he had caused it, and the ball traveled eleven meters in search of a connection between temporal and emotional. But Danny Ward, an anonymous Leicester substitute who played just five games this season, got in the way, none of them in the Premier League. A paradón, down, at one hand, served as an anticlimax. Benzema went unmarked on his return to the French national team, who eventually beat Wales (3-0). It was a test, a friendly to sharpen before the Euro. And it was not as bad as can be inferred from that bad moment.

Benzema led to a penalty that ultimately opened the game because in the action the Welshman Neco Williams was sent off, who cleared with a two-handed backhand a shot from the French footballer who was going to the net. And he mixed with Griezmann and with Mbappé. He had already lined up with the Barcelona forward, for example, in the World Cup in Brazil. But with the explosive talent of PSG he had never played. The mixture promises because they seem complementary. And above all because they are very good.

Wales presented them with a sudoku game in a game that had two versions. The first, with numerical equality, offered some clue of what France wants to be without the ball, applied to raise lines, recover the ball and launch. The second forced him to circulate the ball before a retracted rival. Any hint of rigidity dissipated when he connected his trident, which he played on the inside, with Griezmann operating a few meters behind Benzema and Mbappé, but without any of them occupying the flanks, which were terrain for the wings.

The intense traffic on the front was managed by France with some ease. A heel shot from Mbappé to leave Griezmann with space to place an unattainable shot for Ward revealed that ability to deal with difficulties. It was the second goal. Before, one of Mbappé had arrived, revived to go to a rebound after Rabiot’s shot from the front. France broke stone to demolish the Welsh bolt, she did it with sufficiency and ended up comfortable, liking herself at times.

The game was enjoyable for France and, above all, for their forwards. Mbappé showed that he has a category to play also when he is denied spaces. And every connection with Benzema, every look, betrayed complicity. Before scoring the penalty, the Real Madrid striker had already been able to score with a header that dismantled Ward.

Some defensive mismatch blurred the night for France. Wales could mark him on his first arrival and also when the game already seemed on track. On both occasions Daniel James, a young talent from Manchester United, took aim and Hugo Lloris put the brakes on, very solid under the sticks. The British team is facing an interesting renovation compared to the one they surprised at the last European Championship five years ago, but they will continue to need their veterans. At least on the Mediterranean evening in Nice, Gareth Bale did not get up from the hammock. When one hour of the game had not yet been completed, he was substituted to the booth without having hardly touched the ball.

It was a night of testing, also to show muscle. Deschamps, the French coach, did when he added Coman to his star trident. Griezmann then operated as a link with the medullary in a drawing that at times turned to a daring 4-2-4. Dembélé had a quarter of an hour in the relief of Mbappé. The sevillista Koundé made his debut as an international and did so as a right back, a position in which his coach had already announced that he was going to use him. Benzema played the entire game, but did not find the goal that Ward had denied him. He finished off the post in the prelude to Dembélé’s goal that marked a comfortable win. Shortly after the goalkeeper frustrated him in another header. He looked for the goal in 100 ways in an interesting football recital, but he abandoned his aim.