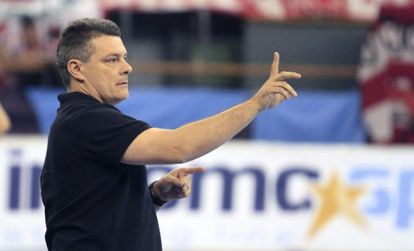 Barça and Xavi Pascual have reached an agreement to terminate the handball coach’s contract once this season is over. Thus concludes the coach’s long and triumphant stage, which began in October 2009 and during which the Barça team won two European Cups in 2011 and in 2015, five Club World Cups, 11 Leagues and 10 King’s Cups, among a total of 48 titles.

The departure of Pascual, advanced by Mundo Deportivo and confirmed by EL PAÍS, occurs coinciding with the return as president of the club of Joan Laporta, in whose team is Enric Massip, former player and former technical secretary of the handball section, now as deputy for president. The first differences in the criteria of the new directors of the club occurred last month when they decided not to renew the contract of the Danish Aron Palmarsson despite the fact that there was already a principle of agreement. Pascual (Barcelona, ​​53 years old) was upset by the loss of a player that he considered important in the squad’s schemes. It was only a symptom of the change of course that the new directive wants to promote.

Pascual’s contract ended in 2022, but he has reached an agreement for termination when the season concludes. Barça faces the quarterfinals of the Champions League on May 12 and 20 against Meshkov Brest of Belarus. If he passes the tie, he will play the Final Four in Cologne, on June 12 and 13. In the Asobal League, the Barça team must play the last four games, although it was already proclaimed champion on April 19.

Pascual, exporter, coach of the Barça team since he relieved Manolo Cadenas in February 2009, has managed to make his team win everything in Spanish competitions for a long time. The last time Barça lost in the League was on April 14, 2018, against Granollers at the Palau Blaugrana (28-29). Since then, they have only given up one draw, against Logroño, on March 27, 2019. Their dominance is similar in the rest of the national competitions. The last title he lost was the Copa del Rey in the 2012-2013 season after losing in the semifinals to the late Atlético de Madrid.

Barcelona lost last season’s Champions League final to Kiel in December, which had been postponed due to the pandemic. This season he has broken another record in European competition by winning all 14 matches in the regular season and also the two in the round of 16.