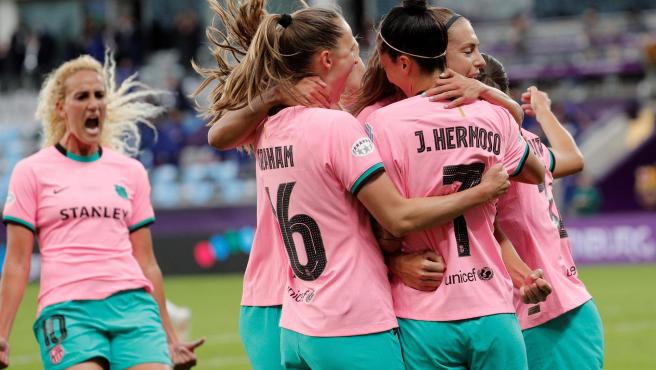 The FC Barcelona made history this Sunday by proclaiming itself champion of the Women’s Champions League after sweeping Chelsea in the final (0-4). With goals from Leupolz (own goal in minute one of the match), Alexia Putellas, Aitana Bonmati and Graham Hansen, Lluis Cortés’s men already went into halftime with the cup in their pocket.

They make history for Spanish football and for Barça itself, which becomes the first club in history to have achieved the most important trophy at club level in both the men’s and women’s soccer sections.

Lluís Cortés’s players dominated the final completely, and sat in the chair. They came from losing the 2019 final, in their first fight for the title, against Lyon (4-1) and they showed they had learned their lesson and their incredible growth to, this time, be the scorers.

With a game, in addition, very ‘DNA Barça’, very of that male team trained by Pep Guardiola that conquered the ‘Champions’ of 2009 and 2011. This Barça de Cortés, Alexia Putellas, Aitana Bonmatí or Jenni Hermoso amazed many, uncovered the eyes of others, and sank a ready-made Chelsea to win.

Talent from La Masia added to talent signed from abroad to complete the squad. That formula that worked so well for the men’s Barça and that the women’s is exploding now, in its second ‘Champions’ final in three years, in its first title won in two attempts.

No other club had so far managed to win the Champions League with its men’s and women’s team. Chelsea, who chose to do so, remains at the gates for not knowing how to find the key to the Blaugrana lock, or stop a Martens or Graham Hansen who contributed to Barça making history.

If in 2019 Barça was the first Spanish team to reach the final, now it is the first to win the competition. The first club to make that particular European double in terms of top male and female competition. It was time to win, and they did.

In that final in Budapest lost against the mighty Lyon, Barça was sparring and seeing if the flute sounded. In Gothenburg, the Blaugranas were slightly favorites and had pressure to win, and they solved it with an agility and superiority equal to that of Guardiola’s ‘best Barça in history’.

Hunger for unparalleled success, going from ‘amateurism’ to winning the ‘Champions’ in just a few years, allow Barça Femení to be at the top of Europe and FC Barcelona, ​​after the bet made by the team trained by Lluís Cortés, to become the most complete football club in the ‘Old Continent’. It remains to be seen if, as now, they continue to be better than them in the nearest future.