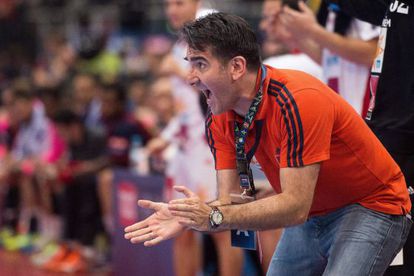 The arrival of Antonio Carlos Ortega (Málaga, 49 years old) on the bench at Barcelona handball takes place in the midst of the debate over the controversial departure of his former coach Xavi Pascual. Ortega, who played for Barça from 1994 to 2005 and was one of the members of the Dream Team that won six European Cups, has signed a contract for the next three as a coach after having terminated the contract he had with German Hannover.

The incorporation of Ortega comes after Barça and Xavi Pascual decided to terminate the contract that united them for one more season. Pascual, after 12 seasons in which he won 61 titles and in the last one he won all possible games and titles including the Champions League, argued: “The board of directors has another project in which they do not count on me and that is what Laporta communicated to me.” The Barcelona coach will direct Dinamo Bucharest next season and Barcelona also dismissed sports director David Barrufet, whom he fired after 37 years at the club.

Enric Masip, advisor to the president of the club Joan Laporta, explained Pascual’s departure. “Pascual was offered to continue for another year, but there were (in his contract) some abusive clauses for the club. He had a very high contract and if he won the Champions League, he was automatically renewed for two more years with very high clauses, “Masip said in an interview on TV-3. “We told him that he could continue, but without clauses. He decided no and we reached an agreement to terminate the contract. ” Masip also revealed that the previous board chaired by Josep Maria Bartomeu was responsible for signing Pascual’s contract based on a false premise. “An offer came from PSG, which Barça itself knew did not exist. Even so, Bartomeu signed. Each one plays his cards. It happens and it will always happen, but all this leads to the current bankruptcy situation ”.

Ortega managed Hannover from the 2016-2017 season. He began his coaching career after concluding his playing career at the age of 33 due to injury. With Barça he won six European Cups, a Recopa, an EHF Cup, six Leagues and four Cups, among other trophies. He was international 146 times with the Spanish team and won the bronze medal at the 2000 Sydney Games and a silver medal at the 1998 European Games and a bronze medal at the 2000. He began his time as a coach at Antequera, from 2012 to In 2015 he directed the Hungarian Veszprem, in the season from 2016-2017 he was in charge of the Japanese team and a season later, Kolding, before moving to Hannover.