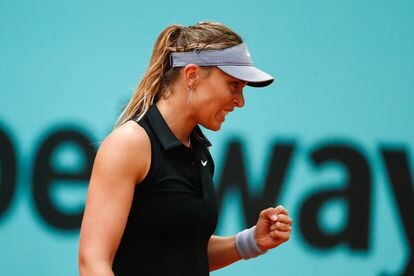 Without making excessive noise, but with a firm step, Paula Badosa continues to excel. A little over a year ago, the Spaniard decided to take a radical turn in her career and began the transformation with several rudder strokes. In September he hired a new coach, Javier Martí; then it replaced Barcelona with Madrid, as the center of operations; and after several years in the dark, mentally, he removed a heavy backpack and clenched his teeth to leave behind some evils. The result is another player, a new tennis player, convinced and eager. Determined to explore her own limits.

“I needed to prove to myself that I could make it to these rounds,” she said on Monday night, after coming back from a dog-face fight with Anastasija Sevastova, after 2h 35m. “I have always believed that I can aspire to great things, even if I have had bad moments in my career. I trust my ceiling is way up, I work for that. A year and a half ago I was playing ITF tournaments, trying to fight to reach the top-100. It was costing me a lot. I didn’t see all that future that people said I had, maybe I didn’t believe I could really be there. Now it seems that these things are beginning to be fulfilled ”, explained the Catalan, born in New York.

What has been said: a completely different tennis player, much closer to the one who won the Roland Garros as a junior (2015) and who dreamed of emulating Maria Sharapova. Now he traces his own path, without ties or comparisons. In October she took flight in the autumnal edition of the French great – she fell in the eighth, injured – recently she beat number one in Charleston and in the immediate present has broken her barrier in a posh tournament like the one in Madrid. The Spanish capital may represent a turning point.

This Wednesday (11.00, Teledeporte), on the second court of the complex, she will fight for a place in the semifinals with the Swiss Belinda Bencic, whom she already defeated in Charleston, also on clay.

If successful, the only Spanish survivor in the women’s team would slip into the top fifty of the WTA and become the second best national player, behind Garbiñe Muguruza. “It is a question of the head, yes, but also of tennis. If both physically and tennis you are not well, you do not win these tough games ”, she says renewed, with 23 years and a beautiful opportunity ahead in the Caja Mágica.

She will open the day with Alejandro Davidovich, who escaped from a high voltage crossover with Frenchman Pierre-Hugues Herbert (6-7 (5), 7-6 (4) and 7-6 (4) and will face the same hour with Daniil Medvedev. Roberto Bautista (6-2, 6-7 and 7-5 to Marco Cecchinato) accompanied him this Tuesday with John Isner in the fourth shift, and Albert Ramos (7-5, 5- 7 and 6-4 to Taylor Fritz), who will see them, not before 2:00 p.m., with the Argentine Federico Delbonis.

All the Results of the day / Order of play Wednesday.