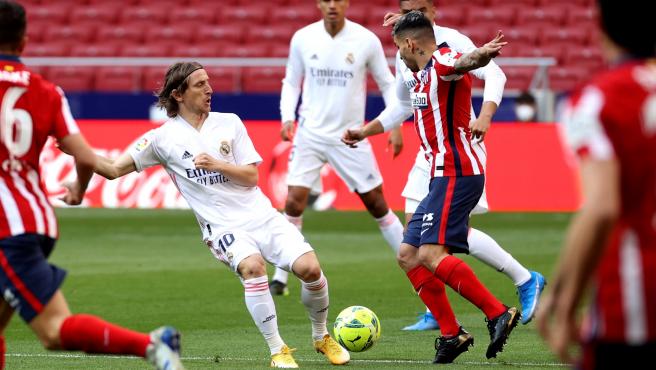 The exciting 2020/21 League will meet its champion this Saturday. Atlético de Madrid arrives as the leader and is the great favorite to lift the title, but Real Madrid does not give up and wants to put pressure and fight until the end.

Winning Valladolid will give life to the rojiblancos. Simeone’s men only have to focus on one goal, on defeating a team on the brink of decline and that arrives with morale on the ground after his recent bad results that have placed him with a foot and a half in Second. “It has been a very hard week. The players are affected and this situation causes a lot of pain,” said Sergio González, coach of the Pucelano club, at yesterday’s press conference.

Atlético arrives in a privileged position, but the game against Osasuna is the best warning that it will not be easy to take the last step, to win the match that would reward a season in which he has been leading the competition almost from the beginning. First in a virtual way (it started with two games less played), then with forcefulness and having around ten points of advantage in this League marked by the pandemic in which there was always a team that had fewer games and it was impossible to calculate with certainty what was the real difference between the above.

A tremendous pothole at the end of February and the beginning of March tightened everything, and shortly after the end it seemed that the mattress team had lost the train of the League after falling in San Mamés. But he endured. He played difficult games against Elche and Real Sociedad, managed to draw at the Camp Nou and his heroic victory against Osasuna makes him arrive depending on himself. And whenever it was like this during its history, Atlético was proclaimed champion of the League.

The other candidate, Real Madrid, has a more complicated rival … but nothing is at stake. And even more, we will have to see which team Unai Emery puts on, given that Villarreal plays on Wednesday, four days later, the final of the Europa League.

The whites have no choice but to win their game and wait for the mattress stumble. With a draw in Zorrilla it would be worth it, but there is not much optimism in the Madrid environment, in which it is still remembered Militao’s famous hand against Sevilla. “I rarely disagree with the referees’ decisions, but this time I have to,” German Toni Kroos said on Thursday.

The white club is waiting for the end of the League to start planning next season. As soon as the referee whistles the end of the game, the attention will go to two names: the first, that of Zinedine Zidane. Let no one rule out that, whether there is a party or not, reveal whether or not he is still one more year on the Madrid bench. The other is that of Sergio Ramos, whose presence against Villarreal is unknown. The camero is still recovering from his injury and although he has exercised in the last three sessions, he does not seem to be 100% yet. Has the captain already played his last game in the white jersey?

The only clear thing is that this Saturday, around 8 p.m., there will be a party in the capital, either in Neptune or in Cibeles. Let it be with responsibility.