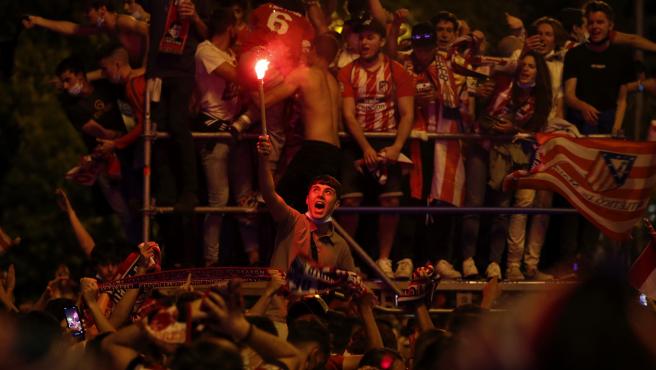 The hobby of Atletico Madrid overflowed the center of Madrid, and the authorities had to do their best to prevent further incidents than those that have already occurred.

The most serious was, without a doubt, the death of a 14-year-old boy who hit the entrance to a parking lot. The boy was in a car with some friends of his parents and put half his body out the window before the tragic event.

The club showed its consternation “for the sad news of the death of a young athletic man.” “We send all our encouragement to the family in these moments of pain. DEP”, published the rojiblanco club on social networks.

For its part, the Samur Civil Protection attended until 3:00 on Sunday to 27 people during the celebrations for the victory of Atlético, of which 7 required hospital transfer.

The Samur operation was installed in the Plaza de la Bolsa, near Neptuno, a regular venue for celebrations for athletic fans.

Cordoned off by the police, the Neptuno fountain received a crowd of Atlético de Madrid fans who flocked to the rojiblanco symbol to celebrate the eleventh title in its history. Despite the authorities’ recommendations, a red-and-white tide flooded the streets in the center of the Madrid capital.

The sources specify that around 02:45 hours there was a small altercation on the Paseo de la Castellana, where several people made a bottle and National Police agents asked them to clear the area, which caused some congregants to throw bottles at the agents.