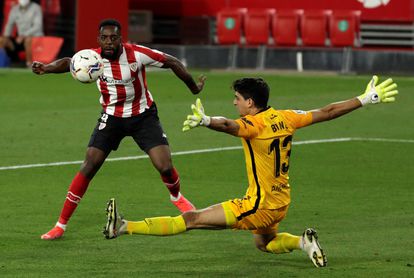 Athletic threw Sevilla out of their dreams by fighting for the League. A goal from Iñaki Williams in the last minute depressed a somewhat anxious Andalusian team, who eagerly sought the winning goal and found a goal from their rival after risking a lot and finding no prize. Sevilla lacked success, stopped by a great Unai Simón, who made three very good saves that frustrated the Andalusians. With this defeat, Sevilla is fourth with 70 points, six behind the leaders, Atlético, and four from Madrid (74) and Barcelona (74). On Sunday he visits Madrid after giving ground in the fight for the title. Athletic played their game, saved themselves from the harassment of Sevilla and won with some changes that they contributed. Something that the Sevilla did not do. The Basques still have options to fight for seventh place, occupied by Betis, six points behind.

For the first time in the series of games that they have been playing to have a chance to win the League, Sevilla felt the pressure to win the match, this time against Athletic, a feeling highly known in Atlético, Madrid and Barcelona, ​​very used to the vertigo of always having to win.

That backpack was unknown to Lopetegui’s pupils, who had been winning their matches somewhat crouched. Against Athletic, and after the triumphs of their direct rivals, there was no possible barrier for Lopetegui’s team, delivered to an unthinkable goal at the beginning of the season.

Lopetegui could count on Koundé to form with his gala team, while the casualties accumulated in an Athletic that does not lose, but that does not win much either. With Íñigo Martínez as a last-minute absence, the Basque team returned to Seville, practically their second home this year after the two cup finals. Nothing is easy at this point. Even for this Sevilla that touches the ball so well and that subjected Athletic to a siege from the first minute. The ball was the patrimony of the Andalusians, who, little by little, were accumulating arrivals to the Basque area. For Marcelino’s men, the ball barely lasted a second, in the power of footballers like Suso, Rakitic and Papu, well protected by Fernando. Athletic held on with dignity, with Raúl García injured in the 14th minute, suffering especially with the centers to the Acuña area, more incisive than Navas. Two passes emerged from the Argentine’s feet that En-Nesyri turned into great shots, as were the excellent saves by Unai Simón. Athletic was saved thanks to its goalkeeper, also threatening with some action from Villalibre and Morcillo, very incisive on the left wing. Only once did Sevilla break Athletic down the middle, but En-Nesyri was too generous. Without finding the goal, Lopetegui’s team arrived dry at the break.

Sevilla tried in multiple ways in the second half. But he felt something thick and, with the passage of minutes, quite nervous. Lopetegui risked a lot in search of the goal and the Andalusians claimed a hand from Balenziaga as a penalty after Navas’s center. The arm was detached from the body, but there was hardly any distance between the center of the side and the Basque player. Gil Manzano saw it very clearly from the beginning. With Sevilla overturned, a very well-finished counter by Iñaki Williams greatly enhanced the dream of this great Sevilla, who bent his knee after five consecutive victories and before visiting Madrid on Sunday.