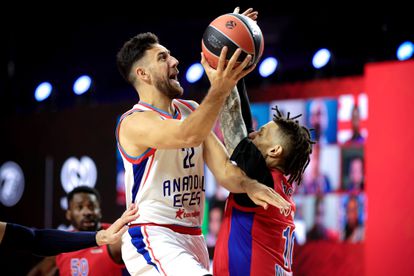 Anadolu Efes overcame the ups and downs of their sparkling game, won 86-89 and sealed their place in the Euroleague final. He got it thanks to his ability to dominate the game by 21 points first and to dodge after the tremendous terminal stretch of CSKA. The Russian team reached a point with a minute to go and had a triple to complete a great comeback. His American forward Will Clyburn failed and the revenge of Efes was consummated, which had lost the last final, in 2019, precisely against CSKA. Clyburn was the MVP of that final in Vitoria. This Friday, in Cologne, he added 26 points, but with his last failure the luck was cast.

Efes demonstrated their full belief that the European basketball throne belongs to them in their own right. The forcefulness with which he came to dominate confirmed the great feeling that he already gave last season when he was leader of the regular phase before the suspension due to the pandemic and also the dynamic and fluid game that he has been showing often in recent months, although with enormous ups and downs like the ones he showed in his quarter-final duels against Real Madrid.

His coach Ergin Ataman was not afraid of being branded arrogant and pretentious when he proclaimed upon his arrival in Cologne this week that his team deserves to win this Euroleague. Due to the way in which that outside hat trick formed by the Serbian Micic, the French Beaubois and the American Larkin, together with the Turkish center Sanli, launched into the jugular of CSKA, there is no doubt that their players share and believe in that idea. The review they gave CSKA for three-quarters of the game was overwhelming. He dominated by 21 points (39-60). They were accurate in the triples – five without failure in the first quarter, although they were less -, dynamic in the transitions, greased in the static and fanciful combinations and loose in the offensive actions. “I give them freedom in attack and that makes them play comfortable,” says Ataman, in a phrase that refutes the tendency of many coaches to complicate the game.

But CSKA did not fall apart. He persisted in his obsession to stop Micic, scorer of 25 points, and to improve his attack. He succeeded when he detected inspiration from the explosive Danish guard Lundberg with 12 points in the third quarter. Russian Ukhov was added unexpectedly in the fourth quarter. He improved the defense over Micic, who committed two consecutive fouls in attack and was eliminated. Three minutes to go. The Russian team, already propelled by their usual gunners, Clyburn and Hackett, slid within eight points with five minutes to go and pulled the rope fully. The successes and errors happened. Larkin missed a pair of free throws at a critical moment. But CSKA needed to be infallible. He was ready, but failed. Efes will be back in the final in a display of the strength of Turkish basketball, which is chasing its second title after Fenerbahçe in 2017.

Lanxess from Cologne. Behind closed doors.