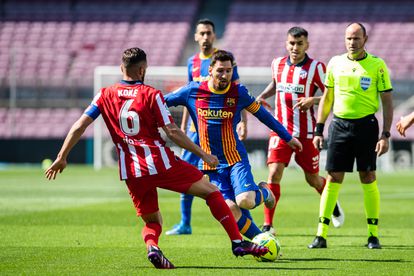 With three days remaining to finish the League, four teams separated by six points, any prediction is valid if the results of the title contenders in the last three games are taken into account: Atlético, Barça and Sevilla have only added four points out of nine at stake for five Real Madrid.

Zidane’s team conceded a draw with Sevilla that prevented him from reaching the head due to his better goal difference with Atlético. The azulgranas also failed to dismount Atlético at the Camp Nou after failing in their previous assault on the leadership against Granada. And Sevilla’s streak ended in San Mamés.

This explains why Atlético can manage the income of the 12 points that it accumulated in a first round similar to that signed by Madrid de Mourinho in 2011-2012 or Barça de Tito Vilanova in 2012-2013, when they sang the alirón with 100 points – halfway through Simeone’s roster totaled 50.

The classification and also the calendar play in favor of the rojiblancos, who host Real Sociedad and Osasuna and visit a team that competes to avoid relegation such as Valladolid. Madrid is endorsed by its advantage in goal difference over Barcelona and Atlético and on the other hand, three strong opponents await them, such as Granada, Athletic and Villarreal. Neither are Barça’s opponents less: Celta does not renounce Europe and Levante and Eibar aspire to remain in the First Division. And Sevilla will face very different opponents such as Valencia, Alavés and Villarreal.

The behavior of the candidates to win the tournament is being irregular due to the many variables of the season: the VAR criterion, especially controversial when judging a hand in the area, and also the field factor, which is no longer decisive due to the absence of public in stadiums: Barça has lost up to 16 points at the Camp Nou to 15 for Madrid in Valdebebas.

In a disfigured championship, Barcelona have only counted one point in their duels with Barça and Atlético – five if the two are added against Sevilla – despite having Messi, top scorer with 28 goals. At the expense of both Madrid and Atlético, the Catalans live in uncertainty, pending the continuity of 10 and with doubts about Koeman despite having a contract until 2022.

Nor does Zidane’s future seem very clear after the European defeat against Chelsea. The coach has always valued the League more than the Champions League. The same does not happen with Atlético, always familiar with Simeone, nor with Sevilla, who have taken flight with Lopetegui as Monchi’s bet, always a protagonist in Nervión.

The depth of the templates designed by the sports directors can be decisive in a moment of great fatigue in the same way that emotional management will influence after the moments of frustration experienced by the four placed in the final fight for the League. In the absence of authority and football hierarchy, the title is in limbo no matter how much the favorite is Atlético. Neither Madrid nor Barça have ousted him when they could.