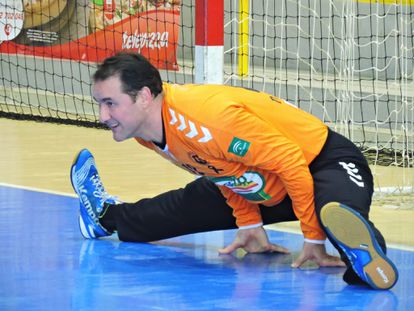 Diego Moyano is 50 years, four months and 130 days old. At his age and with his dedication, an elite handball goalkeeper, even the minutes matter to put in value his example of longevity. Two weeks ago he returned with Antequera to the highest category and his intention and that of the club is to continue another season. He faced stars like Talant Dujshebaev or Oleg Kisselev in their physical plenitude, and in recent times he has done so against their children. “At first, young people look at you with too much respect. Their arm stiffens, with a kind of fear in case they hit you. But that lasts a week. I try to convey confidence and that I am here to advise you. If they let them … What I want is to continue playing, to do what I like from a more relaxed perspective, “he says on the other end of the phone.

No one has disputed the Asobal at this point in life. Jota Hombrados, the great reference, still active in Guadalajara, is at 49. In other team practices, the record in soccer falls since prehistoric times and by chance on an Englishman, Harry Lowe, a Real Sociedad coach In the 1930s, he decided to take the field at the age of 48 and 226 days after a player was injured. And in basketball it has been held since 2011 by the American Darryl Middleton, aged 44 years and nine months, defending the Valencia jersey.

Moyano doesn’t do many accounts. The last time he was in Asobal, in 2018, he already became the Grandpa of the competition and now with more reason. He takes it all with ease. “At this age you don’t have to go overboard with training. I am looking for a balance between the point of form and possible fatigue. I regulate myself to get to games well and avoid injuries. During the holidays, I am quite active with other sports, such as tennis, swimming or paddle tennis ”, he explains. He also does not diet. “I do not commit excesses, but I do not deprive myself of anything. If I play at six in the afternoon, I don’t put a stew at 2.30, but a plate of pasta and that’s it. But the stew can be on Sunday, and don’t miss it ”, he says. The recipe, for now, is effective. There are physical aspects that inevitably languish, such as power or volume, but he warns that others can be improved, such as elasticity. “It is a characteristic of the muscle if you work continuously,” he says.

His longevity story increases when he tells that he retired at 45 and that he did not touch the goal for a year and a half. In the summer of 2016, after his time in Benidorm, he decided that he had come this far. However, at the beginning of 2018, Cangas persecuted him insistently. “They were in a critical situation and they wanted me for the second round. I lived outside Alicante, my wife worked and I had to take care of the children. I told them no twice and, in the end, they looked for a formula. I trained from Monday to Wednesday at San Juan, which was in Segunda, next to my house, and on Thursday I was going to Galicia. At noon I landed, trained, on Friday too, on Saturday I played and on Sunday I came back. That’s how I was that half season. They had more faith in me than I did. It took me two or three weeks to get the sensations, but then well. I was surprised, ”he says.

And, again under the sticks, then Antequera arrived to extend the career even more with the possibility of working in a quinoa manufacturing company. “I never planned my life in handball,” he says. So much so that his first decision was to say no.

“They called me from Helados Alacant, which was at Asobal, but I left to study Physical Education in Granada. Call it destiny or whatever you want. At 18 years old, you are not sure of your possibilities and Alicante had not given me many opportunities either. Besides, in that League the only ones who really got paid were foreigners. The rest were semi-professional ”, says Diego Moyano. However, in Granada he wanted to continue competing for pure fun and joined the University of Granada, in the third national category. “And we went up, but the team disappeared. Huétor took his place and, four years later, we were promoted to Asobal. That’s where my handball journey began ”, he exclaims.

A journey through almost 15 middle-class teams, with the fleeting presence in the Spanish team at the 1997 Mediterranean Games and the only protagonist of all periods of this sport in Spain in these three decades. From semi-professionalism to the great explosion with feet of clay of the nineties, clinging to the real estate boom, to this long journey of hardships where the only objective is to resist, and more so in these times of covid. “We lost an opportunity to do things well. Now we have to fight with what we have to have it again ”, the Alicante goalkeeper decides. For now, he is still there.